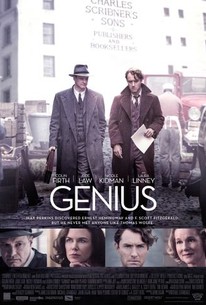 Critics Consensus: Genius seeks to honor worthy subjects, yet never gets close enough to the titular quality to make watching worth the effort.

Critics Consensus: Genius seeks to honor worthy subjects, yet never gets close enough to the titular quality to make watching worth the effort.

Critic Consensus: Genius seeks to honor worthy subjects, yet never gets close enough to the titular quality to make watching worth the effort.

Cassandra Nina
as Woman at Bar

Cassandra Nina
as Woman at Bar

Pamela Okoroafor
as Woman at Bar

Now You See Me 2 Is all Smoke and Mirrors

Genius ends up being terrifically boring, while enthusiastically reproducing the creative hierarchies of the time it portrays.

The biographical Genius is uneven, and that imbalanced focus-the same thing that novelist Thomas Wolfe needed help with all those years ago-is its weakest element.

Documenting the inner life of creative artists and their world is challenging at best... 'Genius' manages to capture the grandiose dreams of both infamous writer, Wolfe, and his long-fabled editor...

I wouldn't call Genius inspired, but not for nothing it inspired me to pick up Look Homeward, Angel for the first time.

Not nearly as smart as it should be.

"Genius" deals with the creative ego, its trappings and the need everyone has for an editor.

As Perkins and Wolfe discuss the importance of every choice and omission an artist makes in crafting work, it is sad that Genius doesn't know show much evidence of that same consideration.

A great wall separates the producers, writers and directors at present from the kind of mental effort it takes to represent the world in a serious artistic manner. For the most part, unhappily, they have only clichés and guesswork at their disposal.

Michael Grandage could've used his female stars more powerfully-and the whole film smells of Oscar Bait-but the opposites-attract friendship between Perkins and Wolfe is the stuff of literary lore and is more than enough...

While the film fails to live up to its namesake, it's a starry, solid account of a literary icon and the man who brought him to the world.

Eddie Falvey
One Room With A View

A bit of a retread of drunk writer self-destructs tropes, but if you can't resist yet another trip down memory lane with your favorite writers, no matter how many times you may have taken it before, then Genius will give you another chance.

Based on a true story, Genius is a compelling character drama that explores the creative spirit. When book editor Max Perkins comes across a manuscript by struggling writer Thomas Wolfe he sees the potential of a great novelist, and works with him tirelessly to get his books edited and published. The film does an especially good job at showing the collaborative process that artists and editors have. And both Colin Firth and Jude Law deliver incredibly strong performances. However, the plot's a bit formulaic, featuring a lot of standard struggling artist tropes (battle with alcoholism, betraying friends and family, etc.). Also, several characters are underdeveloped; Nicole Kidman in particular is wasted as a stereotypical neglected wife. Yet while it has some problems, Genius is a fascinating look at the creative process and the man who shepherded some of the most prestigious writers of the early twentieth century.

A film about some of the greatest writers of all time, and the editor who found those very writers? It has to be really well-written right? Well, that's not necessarily the case. While as a concept, 'Genius' is fascinating, it doesn't always live up to the greatness that the subjects of the film bring to the table. First time director Michael Grandage took on the project, and managed to pull in some serious acting talent in Jude Law, Colin Firth, Nicole Kidman, Laura Linney, and Guy Pearce. Quite the cast if I may say, and they are clearly the best thing about 'Genius'. Law, who plays the eccentric Thomas Wolfe, can be over the top and even sometimes out of sync with the tone, is perhaps the most entertaining thing about this story. His unpredictability and tragic nature to how he treats his life and the people in it can be difficult to take your eyes off. Firth is always great, and plays the famous editor, Max Perkins. And Kidman is the standout performer as she adds the most layers to what is mostly a thinly written movie. I just found a whole lot of it to be flat and hollow. There are times where the film is on the brink of greatness, but it never takes that next step. Instead, it too easily falls into the tropes of a clichéd biopic. It's unfortunate, because I really like the angle they were going for. An editor and a writer struggle to juggle both work and family in the midst of writing a book that runs over a few thousand pages. I love movies about behind the scenes stuff, but much like 'Hail Caesar!' from earlier this year, it doesn't go the extra mile to make it more than just your average biopic. The performances are great and the direction is okay, but I needed more out of the script. The film is about as dull as the color coding is. +Kidman & Law +Felt like the 20's +The premise is fascinating -Thinly written script -Beat for beat clichéd biopic 6.9/10