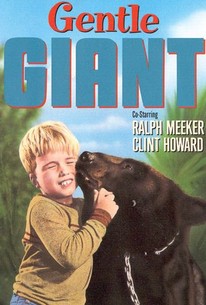 The title character is a benign 7-foot-tall grizzly bear (perhaps all grizzlies are benign, but we're not about to get close enough to find out). Little Clint Howard befriends the bear, naming the beast Ben. Clint's wildlife-officer dad Dennis Weaver and mom Vera Miles have some trouble adjusting to the boy's new pet, but all ends happily after a lengthy sojourn in the Everglades. The best scenes involve ex-Bowery-Boy Huntz Hall, here playing a grizzled old swamp tramp. The upshot of Gentle Giant's success was the TV series Gentle Ben, which also starred Howard and Weaver and which ran from 1967 through 1969.

James Piddle
as Skipper
View All

Prequel to Gentle Ben series has some violence, drunkenness.

There are no featured reviews for Gentle Giant at this time.