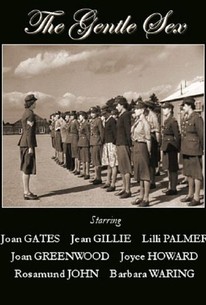 Whenever one sees a title like The Gentle Sex, one braces oneself for an ironic switcharound. The supposedly gentle girls of the title--seven in all--are actually determined young British moderns who go into military service during World War II. In true "Army bomber crew" fashion, the film explores the widely varied backgrounds of the ladies involved, showing the events which led them to their patriotic commitment. As propaganda, Gentle Sex served its wartime purpose; as entertainment, it holds up reasonably well after five decades. The film was coproduced and codirected by actor Leslie Howard, who functions as narrator and (according to one source) can be glimpsed from behind in a couple of scenes.

Critic Reviews for The Gentle Sex

The strength of the film is the subtlety of its direction.

Audience Reviews for The Gentle Sex

I love when I see a film that I didn't know about and then find out that it's quite the little gem. Enter this bit of Brit wartime propaganda that showcases the contributions of the fairer sex, interestingly presented as if trying to convince dimwitted British males that they were blessed lucky to have the ladies on their sider. Therein is the find here, a slice of real Britannica, how the wartime male viewed the other half, their dream women, well presented by director Leslie Howard, who LEFT HOLLYWOOD to return and give a hand back home during wartime ... my new hero, as that decision ultimately costs him his life.