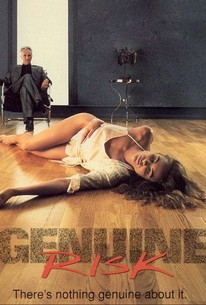 Peter Berg stars as Henry, a chronic gambler forever in trouble with the mob and the law. Through the auspices of his old friend Cowboy Jack (M.K. Harris), Henry is hired as an all-around flunkey by gang boss Paul Hellwart (Terence Stamp). But there's a problem: Henry is currently sexually involved with a nubile young miss (Michelle Johnson) who happens to be Hellwart's main squeeze. Disloyalty begets violence, and violence begets more violence. Anyone looking for logical character development and clever plot twists will be disappointed by Genuine Risk, though action fans will get their fill.

Steven Reich
as Horseplayer
View All

There are no critic reviews yet for Genuine Risk. Keep checking Rotten Tomatoes for updates!

There are no featured reviews for Genuine Risk at this time.