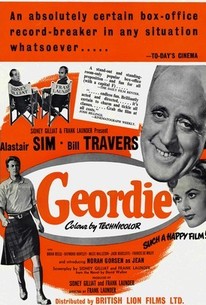 Also known as Geordie, the British comedy Wee Geordie was immensely popular worldwide. A slight of frame and puny gamekeeper's son named Geordie (Paul Young), who is coming of age in the Scottish highlands, grows sick and tired of being picked on. He thus decides to answer a Charles Atlas-style bodybuilding ad. Flash forward several years: the little runt is now a strapping, muscle-bound, disgustingly healthy Olympic champ (portrayed by Bill Travers, who actually did "pump up" and slim down to play this role). Evidently his muscles have spread to his head, for Geordie sees no need for emotional fulfillment, and alienates his longtime girlfriend (Norah Gorsen). But in the process, he becomes the top-ranked hammer thrower at the Highland Games and is chosen to represent the UK in the Olympics at Melbourne, Australia. When Geordie finally falls in love again, it is with towering shot-putter Helga Doris Goddard -- the first woman ever able to best him on the athletic field. Director Frank Launder cowrote the screenplay for Wee Geordie with his longtime collaborator Sidney Gilliat; the film is based on a novel by David Walker. ~ Hal Erickson, Rovi

Alastair Sim
as The Laird

There are no critic reviews yet for Geordie. Keep checking Rotten Tomatoes for updates!

There are no featured reviews for Geordie at this time.