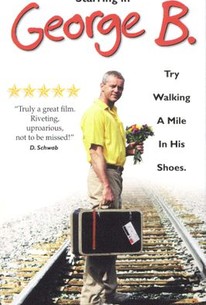 This independent comedy-drama concerns George (David Morse), who works as a janitor cleaning up at a bar in a small town. While no one's sure if George is retarded, he doesn't seem to live in the same world as the rest of them; if he's not unintelligent, he is unfortunately gullible and trusting and lacks the ability to dodge around people's emotions in conversation. George has always thought of his birthday as his good luck day, so one year he decides to celebrate by taking a trip to Reno, and for a change George's hunch is right on the money -- he wins big and comes home with enough money to buy his own house and start his own cleaning business. George finds he's lonely in his new home, and he asks Angela (Nina Siemaszko), a young woman who works at a discount store, to move in with him. Angela doesn't care for her job and is desperate to get away from her harridan mother, so she agrees, though life with George proves to be both funny and troubling. George B. was shown in competition at the 1996 Sundance Film Festival.

Grace Zabriskie
as The Mother

Critic Reviews for George B.

There are no critic reviews yet for George B.. Keep checking Rotten Tomatoes for updates!

There are no featured reviews for George B. at this time.