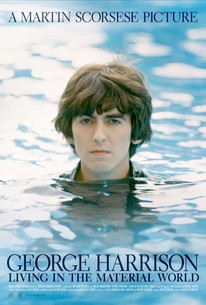 Critics Consensus: Clocking in at nearly three and a half hours, George Harrison: Living in the Material World is a moving portrait of the so-called Quiet Beatle's spirituality and troubled existence that highlights the best of Scorsese's sensibilities.

Critics Consensus: Clocking in at nearly three and a half hours, George Harrison: Living in the Material World is a moving portrait of the so-called Quiet Beatle's spirituality and troubled existence that highlights the best of Scorsese's sensibilities.

Critic Consensus: Clocking in at nearly three and a half hours, George Harrison: Living in the Material World is a moving portrait of the so-called Quiet Beatle's spirituality and troubled existence that highlights the best of Scorsese's sensibilities.

HBO and Martin Scorsese present GEORGE HARRISON: LIVING IN THE MATERIAL WORLD. The film focuses the imaginative and inspired eye of one of cinema's most preeminent filmmakers on one of the world's most influential men. The film takes viewers on the musical and spiritual voyage that was George Harrison's life, much of it told in his own words. The result is deeply moving and touches each viewer in unique and individual ways.

Critic Reviews for George Harrison: Living In The Material World

Despite the shagginess, Scorsese mostly stays focused on Harrison as a reflection of his fans, eternally searching for something elusive - something that only came around occasionally.

History may now be more inclined to view the progressive Harrison as not the quiet Beatle but the cool one.

Scorsese makes it into something more than a three-plus hour rehash of an oft-told tale.

It's a seductive and moving scrapbook made with an outward artistry and an inward conventionality.

Perhaps all things must pass, but I would not pass this one up.

It's not a film one particularly expected to be made but it's a vastly welcome one.

It's no mean feat to have assembled such a lucid biography from hours of footage.

George Harrison: Living in the Material World covers every twist and turn in Harrison's 58 years on this Earth.

A film that sheds a lot of light on its subject but at times can be a little too blissed out for its own good.

This is one of the most ambitious and daring biographical films that I have ever seen on TV.

By removing the edges that gave the man's life some bite, Martin Scorsese hasn't done George Harrison's legacy any favors.

You'd like to think that being one of the Beatles had to be more fun than this long and surprisingly dry Martin Scorsese documentary makes it seem.

Audience Reviews for George Harrison: Living In The Material World

A very well-produced documentary about a very enigmatic figure.

For any Beatles or Harrison fan this is a fascinating and thorough documentary from Scorsese that includes loads of video footage that hasn't been seen before and interviews from all the important people in Harrison's life (apart from Lennon, obviously). The music is also amazing and I really hope they bring a soundtrack album out as it would stand as a brilliant Greatest Hits. The main problem with the documentary is that Harrison is portrayed too much as a saint and his darker side and times isn't really explored. Patty is featured briefly but the disintegration of their marriage isn't gone into in any detail and you feel that too many things are being left unsaid. Also, despite featuring the Wilbury's his 87 comeback album 'Cloud 9' isn't even mentioned and no music is featured from it. Maybe there is some more included in the bonus features but it would have been nice to show that Harrison did other great albums apart from 'All Things Must Pass'. Still it's a great documentary about the man and I dare you not to have a lump in your throat as Ringo describes his last meeting with the man.

Of course, this documentary is required viewing for Beatles fans. But it's not perfect. Diehards may grumble that so much of Harrison's solo career is ignored (few recordings beyond All Things Must Pass and the first Traveling Wilburys album are discussed). The landmark "Anthology" project also goes unmentioned. More crucially, director Martin Scorsese struggles for a way to depict the Beatles era while remaining focused on the Quiet One and avoiding well-trodden ground. Most of Harrison's Beatles compositions are dutifully plucked out to showcase, but why does Scorsese wholly skip the "A Hard Day's Night," "Help!" and "Yellow Submarine" films? And no interviews with Pete Best or Cynthia Lennon? Meanwhile, we do get unnecessary talk of Lennon's "bigger than Jesus" controversy and an odd emphasis on Klaus Voormann and Astrid Kirchherr. The first portion also has some awkward jumps in time, as if Scorsese considered a flashback structure and abandoned it in midstream. The interviews are not particularly essential, beyond a rare chat with Phil Spector (who comes off quite sharp, despite his strange appearance) and the sight of Ringo Starr getting choked up to recall his final meeting with the dying Harrison. Paul McCartney and Yoko Ono just deliver their usual media-crafted soundbites. No surprises there, though it's interesting to hear McCartney surrender credit for the guitar figure of "And I Love Her." In the end, the narrative doesn't matter much. It's more about fastening onto the rarely seen photos and film clips. A shot of the young Harrison and John Lennon mourning Stuart Sutcliffe especially lingers in memory.