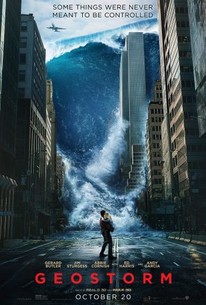 Critics Consensus: Lacking impressive visuals, well-written characters, or involving drama, Geostorm aims for epic disaster-movie spectacle but ends up simply being a disaster of a movie.

Critics Consensus: Lacking impressive visuals, well-written characters, or involving drama, Geostorm aims for epic disaster-movie spectacle but ends up simply being a disaster of a movie.

Critic Consensus: Lacking impressive visuals, well-written characters, or involving drama, Geostorm aims for epic disaster-movie spectacle but ends up simply being a disaster of a movie.

It is the kind of film in which having a British accent will get you punched in the face, but the fact that Gerald Butler talks like Sean Connery in that weird sequence from The Untouchables? Nobody cares.

The script, every scene of which you've seen 100 times already, ends with a sermon urging us to unite and salvage the future, though this rings hollow coming at the end of a $120 million exercise in sci-fi denial.

... the level of boredom I experienced during Geostorm ought to qualify as at least a second-degree felony in the state of New York.

I'd be lying if I didn't admit to giggling madly through the majority of this bit of B-grade hokum.

Not quite the geostinker people were expecting, but the outlook is far from favourable.

Watching Gerard Butler solve a whodunit is like watching ... chimpanzees move a piano downstairs: a kind of teeth-baring, flea-picking burlesque of recognisable human behaviour that's funny for a while until you start to worry about the ethics of it.

A popcorn flick through and through. It might not be filling but it tastes good enough to munch on for a short while.

Give Devlin credit for trying to mate a government paranoia thriller with a disaster flick, but take away points for making a movie as alternately dull and daft as this one.

Whether or not the geostorm actually occurs (and to what degree), it still wins, considering that the pre-geostorm anomalies cause trillions of dollars worth of damage.

A disaster movie so cheesy it should come with pepperoni on top.

The earnestness with which Geostorm want to use effects-driven spectacle to get me to root for human unity won me over.

This "unconcerned" tone that surrounds the whole set makes 'Geostorm' a first order diversion as brainless as recommended. Bad? No doubt. Entertaining? Even more. [Full Review in Spanish]

Geostorm is a disaster of a film. Both ice cold with its one-dimensional characters and blazing hot with its stupidity. A raucous tsunami of unappealing visual effects that never strike a balance between political thriller and global disaster blockbuster. It's hailed as an outdated illogical mess, and I for one agree. Having said that, some moments of enjoyment are to be had if you are willing to suspend your disbelief. A space station that controls Earth's weather system is being hacked and used as a weapon. It's up to Butler to save the day (because apparently no one else can...). It commences with a condescending expositional narration from a child about climate change, and how we as humans have caused this. Make no mistake, it's an important topic. But, it's never referenced in the film again. As if we're being told off and now our punishment is to watch Geostorm. The story balances a political story where NASA employees and secret service agents attempt to work out what the heck is happening, with Butler's heroic bravura as he works on the space station to also investigate satellite anomalies. The former is interesting, the latter is stupid. Let me explain. Watching agents investigate a global investigation where someone wants them dead, is slightly captivating. Witnessing a spacesuit being hacked (me neither...) as Butler attempts his best Bullock impression from 'Gravity', is not fun. The disasters themselves are tertiary, an afterthought if you will and boy do some of them look terrible, particularly the Dubai tsunami. It's another case of characters seemingly outrunning outlandish weather types whilst everyone else melts, freezes or drowns. At least the space station looks decent, so there is some hope! The culprit(s) was obvious and lacked authentic motives. Every character was one-dimensional. And, as always, Butler sacrifices himself...only to miraculously survive. Oh, don't even start on the special code system that him and his brother created. Moronic. If this was released in the 90s, it could've been. It wasn't, and therefore shouldn't have been.

Just another end of the world destruction film and sadly it's very dull. The issue is the lack of destruction and the point of the story. I get you are attempting to hold back the villain reveal but when the film lacks and real reason for being until you have the reveal. This film could of been a hybrid genre film but there are pointless character moments that add nothing, why is a secret service agent helping the guy she has married over the President? Little things like this are really dumb and are there for the connection of the plot. The film could have been smarter and allowed the plot to mean something, Butler seems to be the go to guy for these high concept films, he looks to be the only actor attempting to breath life into a lifeless film. The finale is fun and offers the action we all wanted but it is too late, they needed a complete restructure and different filmmaker to save this film. 14/10/2018.

With the world of film awash in red boots and capes, yah, super heroes, we moviegoers might be forgiven if we forget that old staple of entertainment, the disaster flick. Not to worry, as it's picked up again here, CGI devastation too tempting to pass up, bigger, louder, more encompassing. There's a tie-in tale, as well, of a government conspiracy and a divided familial entanglement that needs sorting, but you'll figure those out long before the dry Sahara gets hit with a watery tsunami. Unless, of course, you haven't seen all the world devastation movies previous to this. What? You haven't??? Then settle back with some Jujubes and popcorn and a Coke while a hailstorm Cecil B. DeMille would die for sends beachgoers running.