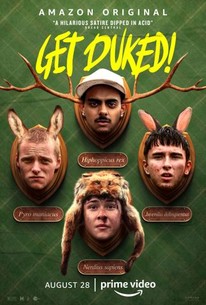 Critics Consensus: The rare comedy thriller that's funny as well as thrilling, Get Duked! marks writer-director Ninian Doff as a filmmaker with a bright future.

Critics Consensus: The rare comedy thriller that's funny as well as thrilling, Get Duked! marks writer-director Ninian Doff as a filmmaker with a bright future.

Critic Consensus: The rare comedy thriller that's funny as well as thrilling, Get Duked! marks writer-director Ninian Doff as a filmmaker with a bright future.

Dean, Duncan and DJ Beatroot are teenage pals from Glasgow who embark on the character-building camping trip -- based on a real-life program -- known as the Duke of Edinburgh Award, where foraging, teamwork and orienteering are the order of the day. Eager to cut loose and smoke weed in the Scottish Highlands, the trio finds themselves paired with straight-laced Ian, a fellow camper determined to play by the rules. After veering off-path into remote farmland that's worlds away from their urban comfort zone, the boys find themselves hunted down by a shadowy force hell-bent on extinguishing their futures. From writer-director Ninian Doff -- making his feature debut after a slew of award-winning music videos and short films for artists including Run the Jewels, Miike Snow, Migos, and Mykki Blanco -- comes an anarchic satire of generational politics, hip-hop loving farmers and hallucinogenic rabbit droppings that pits the youth of tomorrow against the status quo of yesterday.

News & Interviews for Get Duked!

View All Get Duked! News

Critic Reviews for Get Duked!

This is a raucous, non-stop ride that is a little rough around the edges but also unexpectedly endearing, not unlike the four teens at the center.

Doff announces himself as a talent to be reckoned with. His feature debut seems destined for admission into the cult classic hall of fame.

Doff honors those traditions of British comedy by making them feel fresh again. Most importantly, he still makes his four teen tossers a squad for whom to cheer.

It's fun and the satire has a bit of depth to it, even if the movie never quite carves out its own identity.

Get Duked! is good stoner comedy fun, and quite the promising debut from a rookie filmmaker.

Get Duked! is a fun adventure stuffed to the gills with scrappy young folk, a darkly absurdist sense of humor and genial trippiness (thanks to the Scottish Highlands' hallucinogenic rabbit droppings).

Get Duked!...it stands as one of the more viscerally pleasurable viewing experiences of the year on the strength of its considerable, effervescent charm.

Get Duked! was dubbed a "future cult classic"...that's a big prediction, but in the meantime, there's no denying that the Duke of Edinburgh's Award has never been this much fun.

A fun little watch, even if the protagonists veer on the side of grating more often than not.

One of the freshest and most entertaining entries into the coming-of-age genre in a long while.

But if you don't care for a message intruding upon your survivalist comedy, Get Duked! makes that easy enough to ignore with its unbridled silliness.

There are no featured reviews for Get Duked! at this time.