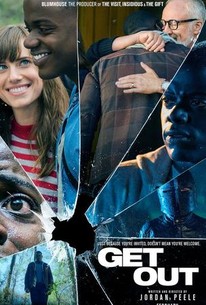 Critics Consensus: Funny, scary, and thought-provoking, Get Out seamlessly weaves its trenchant social critiques into a brilliantly effective and entertaining horror/comedy thrill ride.

Critics Consensus: Funny, scary, and thought-provoking, Get Out seamlessly weaves its trenchant social critiques into a brilliantly effective and entertaining horror/comedy thrill ride.

Critic Consensus: Funny, scary, and thought-provoking, Get Out seamlessly weaves its trenchant social critiques into a brilliantly effective and entertaining horror/comedy thrill ride.

Now that Chris and his girlfriend, Rose, have reached the meet-the-parents milestone of dating, she invites him for a weekend getaway upstate with Missy and Dean. At first, Chris reads the family's overly accommodating behavior as nervous attempts to deal with their daughter's interracial relationship, but as the weekend progresses, a series of increasingly disturbing discoveries lead him to a truth that he could have never imagined.

News & Interviews for Get Out

View All Get Out News

Critic Reviews for Get Out

Peele seduces, subverts and manipulates audience expectations - as the masters Alfred Hitchcock, John Carpenter, and Stanley Kubrick did before him.

This brilliantly provocative first feature from comic turned writer-director Jordan Peele proves that the best way to get satire to a mass audience is to call it horror.

Everything in Get Out seems innocuous on first blush.

Kudos to Peele for tackling a painful subject in such a massively entertaining and thoroughly memorable fashion. [Full review in Japanese]

What makes [Get Out] a worthwhile experience is Jordan Peele's skillful genre intervention.

Get Out is horror filmmaking at its absolute finest.

Get Out is perhaps the best terror tale since the mid-2000s served up The Descent and Pan's Labyrinth, two masterworks that, like this one, have much more on tap than just creeping out audiences.

A film from a highly influential new filmmaker that makes audiences think deeply about life, but it does so through a uniquely conscious horror lens.

Its sucker punch to the status quo has ensured it's impossible to forget.

Well told, impressively rendered, and creepy as all hell.

Audience Reviews for Get Out

Very clever, brilliantly written and wonderfully uncomfortable neo horror movie, challenging racial stereotypes and viewer' expectations with almost every scene. The acting is as outstanding as the premise and the realization. A pretty wild and fun ride, not without humor but also a pretty gory final act. One of the freshest horror thrillers of recent years and deserving of all the praise it is getting.

Intense, thrilling, and very funny. One of the best "horror" movies I can remember.

A weekend getaway to meet the new girlfriend's parents is a horrific consideration for most guys no matter what the situation but Jordan Peele's debut squeezes this chestnut as if it were a bad comedy. This is a decent thrill ride with male paranoia as the fuel for the engine.