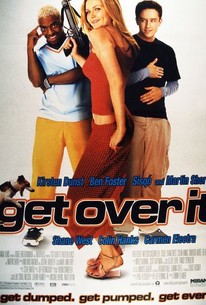 Critics Consensus: As with most teen movies, Get Over It is entirely predictable, and there's not enough plot to sustain the length of the movie. However, it is not without its charms.

Critics Consensus: As with most teen movies, Get Over It is entirely predictable, and there's not enough plot to sustain the length of the movie. However, it is not without its charms.

Critic Consensus: As with most teen movies, Get Over It is entirely predictable, and there's not enough plot to sustain the length of the movie. However, it is not without its charms.

Get Over It Videos

Get Over It Photos

Ben Foster stars in this teenage comedy as Berke Landers, an average high schooler who has achieved high status by winning over Allison (Melissa Sagemiller), reputed to be the most popular and beautiful girl in his class. After an initially winning time, Allison finds herself drawn to the hot new guy in school, leaving Berke in the lurch. At the risk of ruining his unsteady reputation, Berke concocts a scheme for getting Allison back: he will join the school production of +A Midsummer Night's Dream and prove his romanticism to her. Realizing he needs an effective acting coach, he turns to Kelly (Kirsten Dunst), who was once the annoying little sister of a best friend and has suddenly blossomed into a grownup -- to whom Berke finds himself drawn. Berke must then decide if getting Allison back is the ultimate priority, as he falls for the more sensible Kelly, all while trying to maintain a credible presence both in school and in his new acting gig. Get Over It also features R&B singer Sisqo, comedian Martin Short, and Shane West in supporting roles.

Roger McKeen
as Cop No. 1

Chris Benson
as Cop No. 2

Antoinette Delond
as Stripper No. 1

Krista Leis
as Stripper No. 2

Judy Stoimenov
as Stripper No. 3

Larissa Gomes
as Stripper No. 4

Jeffrey Wong
as Attendant/Fairie No. 1

Shawn Fernandez
as Attendant/Fairie No. 2

Catherine Hernandez
as Attendant/Fairie No. 3

Michael Kremko
as Guy in Restaurant

Michael Coristine
as Boy Band Member No. 2
View All

Critic Reviews for Get Over It

The kind of movie where only some of the characters have last names, this essentially sweet-natured enterprise feels slightly rushed and distracted.

Director O'Haver fails to supply any proper shape or development.

This one's going down in my teen hall of fame.

It's the sort of show Judy Garland and Mickey Rooney would have bounced through 60 years ago.

This should have never been made. I'm surprised it made as much money as it did. Sisqo should never act again.

This is epically bad and completely insane. I had to use a lot of patience and willpower to get through this.

[Kirsten] Dunst seems to be a fairly decent actress; why she keeps appearing in the same movie over and over is beyond me.

O'Hayer has some way to go before doing a John Hughes (The Breakfast Club, Pretty In Pink) but Get Over It is a headstart.

Audience Reviews for Get Over It

Although predictable, I still enjoyed this movie. Who knew Kirsten Dunst could sing?

Let The Party Begin! Very good movie! I really enjoyed it, it was very funny. Great Cast! Get over it is a cute no brainer that has some good one liners, funny musical numbers, and clever direction. Rent it the next time it rains and you miss the teen movies of the eighties. Berke is devastated when his girlfriend Allison kicks him out. She takes up with cocky Striker, who claims fame as a singer, and the two of them audition for the school's "Midsummer Night's Dream" musical. Berke follows suit, much to the annoyance of his basketball team buddies Felix and Bentley. Our hero finds himself not only in the play but eventually as one of the leads, partly due to help from Felix's sister Kelly. As First Night approaches, questions need answering - Will Berke and Striker come to blows? Can Bentley take over as the lead dancer? Isn't Kelly nicer than Allison anyway?

What starts as a typical teen comedy turns out to be a very cute and enjoyable if ridiculous one thanks to a minimum of crassness and vulgarity. Helping it along are the charming Kirsten Dunst and in particular Ben Foster who have a nice chemistry together vital for this sort of light weight entertainment to succeed.

Get Over It Quotes