Get Smart's Bruce and Lloyd Out of Control2008 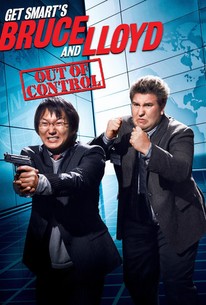 Get Smart's Bruce and Lloyd Out of Control Photos

Bumbling R&D inventors (Masi Oka) and Lloyd (Nate Torrence) get out of the lab and into the field as they search to locate latest invention - which has somehow gone missing. When you're used to spending your day inventing the most cutting edge spy equipment known to man, adapting the stealth and guile needed to become a true secret agent doesn't come naturally. Unfortunately the invisibility cloak that the pair recently collaborated on has disappeared, and in order to ensure that it doesn't fall into the hands of KAOS they will have to master the skills of a true spy. But how exactly does one find an object that's invisible to begin with? As the search gets underway, these brainy inventors are given an eye-opening crash course in high-level espionage. Patrick Warburton and Larry Miller co-star in a feature-length comedy that includes surprise cameos from the stars of the 2008 film Get Smart.

Critic Reviews for Get Smart's Bruce and Lloyd Out of Control

It doesn't necessarily stand alone, although if you saw Get Smart and liked the Bruce and Lloyd characters, then you can get a certain level of enjoyment out of their pseudo-sequel.

...more like a series of afterthoughts than a fully realized motion picture.

Audience Reviews for Get Smart's Bruce and Lloyd Out of Control

It's like the failed SNL skits put together and calling it a film.

This spin-off to Get Smart fails in many ways. The comedy in this not only consists of gags, but fails to bring more then five jokes to it. This is a spin-off that should never have been made. Grade: D

This does have some funny moments. I really wanted to see the original movie before. But got this first so couldn't stop watching this. These guys were really good but they didn't get much part in the real one. The story was okay. Kinda matched with the main movie (tiny bit to say). Does also have some stupid scenes but it's okay to watch.

Get Smart's Bruce and Lloyd Out of Control Quotes