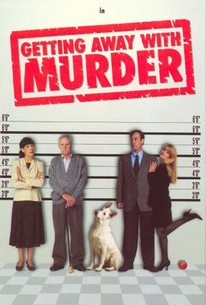 Getting Away with Murder Photos

With Penny Marshall as producer and a cast featuring Dan Aykroyd, Lily Tomlin and Jack Lemmon, one might think that Getting Away with Murder is a promising vehicle for more than a few chuckles and guffaws. But look a little closer and you may find other emotions arising: distaste, shock, and maybe even outrage. Getting Away with Murder, attempts to be a frothy black comedy about the fate of an alleged Nazi war criminal accused of horrendous crimes against the Jews (interestingly, the word "Jew" only comes up a couple times, the filmmakers preferring the more generic term "victim" instead). But with no real underlying point, no sympathetic protagonist, and a story that offers no barbed insights into the potentially fascinating subjects of administering vigilante justice based on hearsay and the notion of atonement for wrongs done, the story becomes vapid, tasteless and offensive. Aykroyd plays Jack Lambert, a mild-mannered professor of ethics who becomes deeply disturbed to learn that his neighbor Max Mueller (Lemmon) has been accused of being the notorious death camp commandant Karl "the Beast of Berkau" Luger, a man responsible for thousands of deaths. After wrestling a bit with his conscience, Lambert poisons the apples on Mueller's trees, causing his neighbor's swift demise. When the press labels the death a suicide, the outraged Lambert sends an anonymous letter to the press stating that he deliberately offed Mueller. Not long afterward, Lambert learns that Mueller may have been innocent after all. Filled with remorse, Mueller dumps his girlfriend to marry Mueller's plain-jane daughter Inga (Tomlin) as a form of penance. Then even more contradictory evidence surfaces that further confuses the issues. Surprisingly, the film received support from the United States Holocaust Memorial Museum and the Yad Vashem Memorial in Jerusalem.

Bernard Shaw
as Himself

Bobbie Battista
as Herself

John McLaughlin
as Herself

Morton Kondracke
as Himself

Fred Barnes
as Himself

Eleanor Clift
as Herself

Roy Hobbs
as Himself

Heather Kahn
as Herself

Colleen Reynolds
as Ferry Woman No. 1

Janet Land
as Ferry Woman No. 2

Nicholas Pasco
as Cop in Jail
View All

Critic Reviews for Getting Away with Murder

...a distasteful affair that should embarrass all concerned...

I suppose it all could somehow have been made funny, but not by the people who made this movie.

Audience Reviews for Getting Away with Murder

There are no featured audience reviews yet. Click the link below to see what others say about Getting Away with Murder!

Getting Away with Murder Quotes