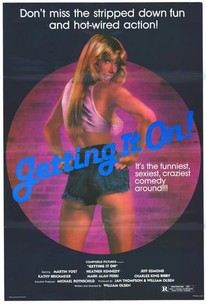 Getting It On Photos

In this funny film about the inventiveness of teens, 14-year-old Alex (Martin Yost) is longing for the winsome Sally (Heather Kennedy) and cons his father into fronting the money to begin a video software business -- when all along, Alex just wants to capture as much of Sally on tape as he can. He is joined in his endeavor by his friend Nicholas (Jeff Edmond), and the two expand their film project beyond the confines of Sally's life alone. Their camera skills come in handy when Nicholas is expelled from school by a mean-spirited principal, and the two boys convince a friendly prostitute to entrap the principal in some compromising positions, hoping to use the video they make for leverage -- or blackmail, in more direct terminology.

Fran Taylor
as Librarian
View All

Critic Reviews for Getting It On

There are no critic reviews yet for Getting It On. Keep checking Rotten Tomatoes for updates!

There are no featured reviews for Getting It On at this time.

Getting It On Quotes