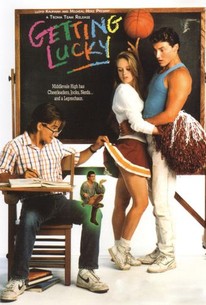 A geeky high school kid gets a shot at the head cheerleader thanks to a four-inch tall leprechaun who makes him absolutely irresistible to the opposite sex. Socially awkward towel boy Bill Higgins is the laughing stock of Middleville High. All Bill wants is to land a date with beautiful blonde pom pom girl Krissi Chackler, but muscle-bound basketball player Tony Chanuka isn't about to let that happen. Bill's luck finally starts to improve when he cracks open a beer and releases Lepky - a diminutive leprechaun who's till struggling to get a grip on his micro-super powers. But turning the school's biggest geek into an irresistible stud isn't as easy as granting a simple wish, and it isn't long before Bill's quest to get lucky becomes more trouble than it's worth.

Critic Reviews for Getting Lucky

There are no critic reviews yet for Getting Lucky. Keep checking Rotten Tomatoes for updates!

Audience Reviews for Getting Lucky

There are no featured audience reviews yet. Click the link below to see what others say about Getting Lucky!