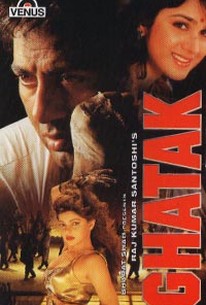 A cruel, tyrannical gangster, Katya (Danny Denzongpa), has taken control of a small Indian village, ruling with an iron fist. A resident named Sachdev (Om Puri) secretly organizes a rebellion, but when Katya learns of his plans, the rabble-rouser is violently put to death for all to see. Hope for the villagers seems lost, until Shambu Nath (Amrish Puri) comes to town seeking medical attention. He is accompanied by his son, Kashi (Sunny Deol), who takes it upon himself to end the oppression he witnesses. Vowing to avenge the villagers and free them from the chains of abuse, Kashi is unaware of the danger in which he is putting innocent people, including his ailing father.

There are no critic reviews yet for Ghatak: Lethal. Keep checking Rotten Tomatoes for updates!

There are no featured reviews for Ghatak: Lethal at this time.