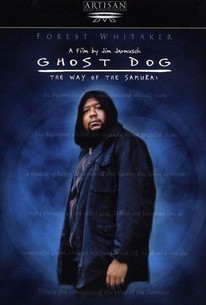 Critics Consensus: An innovative blend of samurai and gangster lifestyles.

Critics Consensus: An innovative blend of samurai and gangster lifestyles.

Critic Consensus: An innovative blend of samurai and gangster lifestyles.

Ghost Dog - The Way of the Samurai Videos

Ghost Dog - The Way of the Samurai Photos

A surreal crime drama told as only Jim Jarmusch could, Ghost Dog: The Way of the Samurai stars Forest Whitaker as Ghost Dog, a hit man living in an unidentified but run-down city in what license plates call "The Industrialized State." Known for his gift of being able to come and go without people noticing him, Ghost Dog is a self-taught samurai who is obsessed with order and his strict personal moral code, drawn from the philosophies of the Japanese warriors. As every samurai needs a leader to whom he swears loyalty, Ghost Dog has devoted himself the service of Louie (John Tormey), a low-level crime boss who once saved his life. When Louie's superiors decide he must be executed, Ghost Dog leaps into action, methodically wiping out his many enemies. Along with a dizzying series of stylized shoot-outs, Ghost Dog also features carrier pigeons, characters who read Rashomon, a French-speaking ice cream man, and a score by RZA from the top-selling hip-hop group Wu-Tang Clan, who have their own well-documented obsession with Asian culture. Ghost Dog was screened in competition at the 1999 Cannes Film Festival.

Gary Farmer
as Nobody

Tracy Howe
as Hunter No. 2

Vinnie Vella
as Sammy the Snake

Jonathan Cook
as Hunter No. 1

RZA
as Samurai in Camouflage
View All

News & Interviews for Ghost Dog - The Way of the Samurai

View All Ghost Dog - The Way of the Samurai News

Critic Reviews for Ghost Dog - The Way of the Samurai

Even when aware of all the strange, disparate elements, it still surprises.

At once a tribute to traditional notions of honour, loyalty, friendship and professionalism, and a stylish, ironic pastiche inspired by the likes of Melville and Suzuki, it's very funny, insightful, and highly original.

This is a picture by turns amusing and melancholic, sweet-centred and dark-edged.

A handsomely shot, cool-sounding head-scratcher of a film that probably isn't worth the wear on the fingernails.

Less a pastiche than a mastermix from a cinematic DJ at the height of his formalist powers, Ghost Dog is pretty ill -- but it's not evil.

it's original, sharply funny, and rather moving

Ghost Dog is one of Jim Jarmusch's coolest features in an oeuvre featuring some of the slickest characters ever. We may not need to understand everything we see, but that's exactly the point.

Another Jim Jarmusch title, another opportunity to add some eccentric twists to a fairly ordinary story.

Freely mixes and matches Bushido philosophy, Mafia and samurai flicks, Ryunosuke Akutagawa, and lo-fi hip-hop into a sly and dreamy comedy about role-playing.

Ghost Dog has retained all of the cool, the quirk, the profundity it captured in a bottle in 1999... One gets the sense that never before Ghost Dog could this film have been possible, and, never since.

The film is a rare oddity in that is very much of its period, yet is absolutely timeless. It's not just that the poetry Jarmusch pulls from Hagakure ... it's that the film constantly creates a simultaneous sense of something ending and beginning.

You don't have to "get" Ghost Dog to enjoy it; it's an experience more open to interpretation.

Audience Reviews for Ghost Dog - The Way of the Samurai

A well-constructed and superb genre piece that has a terrific and poignant mixture of urban attitude, street savvy, stylistic shootings and compelling samurai wisdom along with gangster, western and martial arts genre films. A skillful and darkly engagging character study. A beautifully made and brilliant film. A sharply entertaining and stylish crime-thriller. It`s smart, funny, cool, thrilling and action-packed. An instant classic. A great and genuine surprise to watch. Forest Whitaker gives an extroadinary and compelling performance, one of his best performances ever, it stands wit his work in Bird and The Last King of Scottland. Director, Jim Jarmusch crafts his masterwork. A skillful and enthralling work of art thats handsomely shot, hypnotic and has a seductive rytham all of its own. One of the best hitman films to come along since The Professional.

Now Forest Whitaker isn't the kind of guy you would normally think of for a smart ice cool hitman flick. His big lumbering appearance and droopy eye always gives him the look of a bad guy or suit type, not some ninja like assassin. But here we are in dare I say 'Leon' for a black audience? is that wrong of me? cos this sure as hell is what it is. Take the overall premise of 'Leon' and virtually copy it scene for scene and you have 'Ghost Dog' but with a nice samurai code twist. This film is actually based on a very good French film called 'Le Samouraï' which in turn also probably influenced Besson for his New York based hitman classic. Its pretty fair to say when watching that this is heavily influenced by those said films, from the hit sequences to the little girl who 'Ghost Dog' befriends but doesn't train...although that is hinted at somewhat towards the end. Personally I love this film, its could easily be a sequel to 'Leon' and moves just as sexually and gracefully including some excellent hit scenes, albeit a bit brief. The film is kinda slow and builds around 'GD' training in the art of samurai whilst living his simple life caring for pigeons. Your not really sure if your suppose to root for this guy either, he's not doing good stuff after all. He works for the mob and kills people, breaks into properties and steals cars pretty regularly, he doesn't kill innocents but nor does he care too much about them or their material possessions. Trying not to mention other films too much here but when you see the American mobsters in this it rings so many bells. The bad guys are a classic stereotypical cliched lineup of fat, aging, balding, badly dressed 70's looking rejects that could of come from any well known mafia flick you've ever heard of. I loved how they looked and spoke in that typical Nu Joisey/Nu Yawk fashion with their big tinted shades, dated tracksuits or leather coats, absolutely perfect. You could almost think of these guys as a parody really. Almost caricatures and exactly how you expect Italian American hoods to look and act with the addition of great names like 'Handsome Frank' and the all too common names of Vinny, Ray and Louie. The cast are familiar too, all the regular faces that normally play wheezing old fat mafioso's. Their boss is Henry Silva who is pretty much the perfect face for a bad guy, a mafia bad guy. The man is a character acting legend plus his face is evil looking with those sharp cheek bones and odd stretched wrinkle-less like skin complexion, no wonder he was in 'Dick Tracy'. There isn't too much action here like I said but that isn't a problem really. The film moves slow just like its main player and the outcome is resolved quite quickly really. The Japanese filling throughout is a nice touch which is obviously there because of the French film it plays homage to but it neither hinders or helps really, its just nice little touches that are pleasant to view. End of the day the samurai code doesn't really effect the film much apart from what 'GD' allows to happen. Didn't think the film needed the African American influence of rap music though, would of been nice without that, more unique really as the old gangster thing still looms somewhat. Still a unique film though can't dent that. For me the film is made with the stellar casting for the bad guys, they are really quite amusing, Whitaker does well also in his calm near silent role. A must see film if you like this kind of thing but just don't expect tonnes of action.

Ghost Dog - The Way of the Samurai Quotes