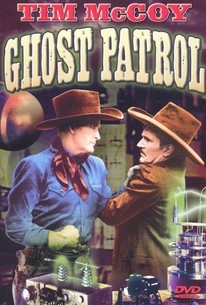 A cowboy turned G-Man looks into a series of mysterious plane crashes in this low-budget but fairly engrossing B-Western starring Tim McCoy. Masquerading as an outlaw, Tim Caverly manages to infiltrate a gang of mail thieves holed up in a ghost town. As Tim discovers, the gang leaders, Dawson (Walter Miller) and Kincaid (Wheeler Oakman), have kidnapped Professor Brent (Lloyd Ingraham), whose electrical ray gun is used to shoot down the planes. Also arriving at the hideout is Natalie (Claudia Dell), the professor's pretty daughter, who warns her father that women and children were among the victims of the latest crash. Although Dawson is suspecting Tim to be a G-Man, the villain orders Brent to shoot down an incoming government plane. There is an exchange of gunfire between Dawson and Tim, and Brent is shot attempting to shut off the ray gun. The professor survives, however, and the villains are apprehended.

There are no critic reviews yet for Ghost Patrol. Keep checking Rotten Tomatoes for updates!

Part Western (as in guys riding around on horses and shooting at each other), part sci-fi (as in an old guy in a white coat in a laboratory flippin' switches) and part gangster flick, this different amalgamation of styles cannot free itself from its own considerable boredom. Even the horses seemed bored. Skip it.