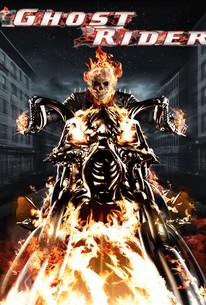 When a motorcycle-riding stuntman offers his soul to Mephistopheles in order to save the life of the one he loves most, he is forced to play host to a powerful supernatural entity whose flaming skull visage strikes fear into the heart of his enemies in this feature-film version of the long-running comic series. By day, Johnny Blaze (actor and comic-book devotee Nicolas Cage) is one of the world's best-known stuntmen, but when the sun goes down and he is in the presence of evil, the death-defying daredevil bursts into flames to become the indestructible, motorcycle-riding antihero known to the world as the Ghost Rider. ~ Jason Buchanan, Rovi

Tony Ghosthawk
as Team Blaze No. 1

Hugh Sexton
as Team Blaze No. 2

Marcus Jones
as Team Blaze No. 3

Matt Norman
as Team Blaze No. 4

Rebel Wilson
as Girl in Alley

Peter Barry
as The Mugger

It all seems so wearyingly old fashioned: teenage delinquents on motorbikes, creaky incarnations of Satan, a rock'n'roll take on dangerous cool.

It's ridiculous, likable, with some pleasing reminders of the Blade movies.

Grand, empty gestures and loads of CGI effects can't cover up pure schlock. Even the character's iconically cool trademarks -- a flaming skull and a fiery chopper -- are reduced to Velveeta slices. No, damn you, sir.

The plot is as corny as a country and western song.

Nic Cage seems comfortable in the role of the flaming-skulled biker, but the plot holes are too deep even for his Herbie-like arachnid motorcycle to negotiate.

By the time our hero has finally relaxed into his leathers, there's little time left to wrap up the main story, which is some forgettable stuff about the devil's progeny (a googly-eyed Wes Bentley) trying to take over the world.

Even the special effects are pitiable.

This movie is stupid in the best possible way. I cheered all the way through - my shrieks of glee echoing off the walls.

Don't worry your little head with the niceties of plot; they don't matter much.

Best lines? "Is this thing ever gonna end?" "Not even close." "I shore wish this thang coulda turned out different."

Ignore the cheesy dialogue, the cardboard cut-out villains and the atrociously OTT acting and just enjoy a good old-fashioned tale of heroes and villains the way the comic-books used to tell 'em.

And here we go into the controversial end of the pool (That seems to be a theme whenever someone brings up Nicolas Cage.) Now I hate Nicolas Cage as of now (Pre 2000s Cage is the only good Cage) and having him cast as a superhero, especially someone like Ghost Rider, is some of the most bizarre casting I've seen in a movie, and yea he doesn't do the best job as the character of Johnny Blaze but he's passable. Most of the acting in the movie overall ranges from cheesy, to straight up stupid (that bit with the Legion quote from the Bible being one.) But the movie at least tries to be entertaining so I'll give it that, and a couple of the actors really aren't that bad in the movie, Sam Elliot doing his usual awesome performance even if not given that much to work with and while not really in the movie that much, Peter Fonda does a decent job as Mephistopheles. Also the action and CG looks just awesome in this movie, and the stuff all involving the Ghost Rider character, while all being usually brief scenes, is just badass, especially all the crap he does with the flaming chain. Overall, while the film may not be that amazingly good, and it does have a few flaws, it is entertaining enough and it does have some amazingly awesome effects and fight scenes. Just don't see the sequel unless you want to self lobotomize yourself.

Someone here thinks there's enough parallels between Elvis' latter day performances as a unitard wearing, kung fu signifying, daredevil cartoon (I recall only utter embarrassment) and a Marvel superhero damned for eternity, to go ahead and make a movie out of it. It actually almost works too. Nick Cage throws in every Presley nuance he can think of except: "thank yah verry verry much!"

Not the worst comic adaption ever but not bad. Decent action film nothing more.