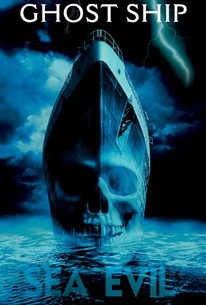 Critics Consensus: With a plot as creaky as the boat, Ghost Ship fails to deliver the scares.

Critics Consensus: With a plot as creaky as the boat, Ghost Ship fails to deliver the scares.

Critic Consensus: With a plot as creaky as the boat, Ghost Ship fails to deliver the scares.

A salvage team think they've made the find of a lifetime, until they discover there's more on board than meets the eye in this supernatural thriller. Led by Captain Sean Murphy (Gabriel Byrne), the crew of the tugboat Arctic Warrior have discovered a sideline far more lucrative than hauling ships in and out of the harbor -- they locate missing or wrecked ships in international waters, repair them until they can be brought back to port, and then sell off the ship and its contents as salvage. Acting on a tip from Jack Ferriman (Desmond Harrington), a pilot in the Canadian Air Force, Murphy and his crew -- salvage expert Maureen Epps (Julianna Margulies), first mate Greer (Isaiah Washington), and crewmen Santos (Alex Dimitriades), Dodge (Ron Eldard), and Munder (Karl Urban) -- set out to find a large craft seen adrift off the Alaskan coastline. To their surprise, the crew of the Arctic Warrior discover what appears to be the Antonia Graza, a famous Italian ocean liner, legendary for its luxury, which vanished without a trace in 1962. While they at first anticipate the payday of a lifetime from this find, the crew soon discover a sinister force has taken control of the ship, and before long they're battling not for salvage rights, but for their lives. Ghost Ship was directed by special effects man turned filmmaker Steven Beck, who previously directed the 2001 remake of 13 Ghosts.

The final reel plots a course smack between predictable and sheer idiocy.

The setting is perfectly promising -- but this is the usual dumbed-down stuff, heading for the video bin.

Where are all the icebergs when you need one?

As a feature helmsman, [Beck's] brought us Thirteen Ghosts ... and Ghost Ship, both of which are absolutely atrocious films for any number of reasons.

A lame script, featuring sorry dialogue and a senseless story, is more likely to provoke laughs than screams from its intended audience.

As for the "shock" ending, it's the sort of feeble finale that has marred many a horror flick for approximately 40 years.

Routine Dark Castle blandness, with the horror factory missing a prime opportunity to generate an interestingly grotesque chiller on the open sea.

Not a masterful script by veteran John Pogue and collaborator Mark Hanlon... it nevertheless gets the job done, thanks to Beck, Tattersall and Hobbs, giving us a haunting little tale set on the high seas, just perfect for a Halloween viewing.

the movie's over-the-top opening sequence is worth the price of admission alone.

After a very brutal and bloody beginning, Ghost Ship plays like an old-fashioned ghost story, the kind that kept you awake when you were a kid.

The folks at Hollywood's Dark Castle Entertainment are polluting the high seas with this dead-in-the-water combo of The Shining and Titanic.

I dont know why but every time i watch this movie i enjoy it more and more! Its a good creepy horror that i dont think is a let down at all ! In my books it well worth a watch!

[img]http://images.rottentomatoes.com/images/user/icons/icon13.gif[/img] Once the protaganists got on the titiluar ship there was one massive jump that spooked me, and I was convincing myself that maybe the film wasn't as bad as everyone was saying but to my displeasure it sank my expectations completely shortly afterwards. On the positive side, the acting isn't awful and the set pieces are excellent and sometimes quite creepy. However the plot is derivative and sadly it's never as scary as it should be.

Can I please get one thing straight - if a film has a jumpy moment near the beginning of a film, it HAS TO KEEP TO THAT JUMPY THEME! You get one jumpy scene with a clock, then that's it folks - Ghost Ship is flawed from the start. A scene where a boat full of people are killed by a metal wire that rips them all in half? I'm sorry, but no. Just no. It didn't work and I still don't get why it had to happen or why the villain had to exist in the first place, let alone the movie. I was told by two horror fans it was, and I quote "...alright". WRONG! It was one of the worst films I have ever seen. It seems to be suffering from what shall henceforth be known as the Paranormal Activity effect: the PA effect is where a film tries to make itself out as a good film, before failing after about 10-20 minutes (in most cases). In this film it took about 20 minutes for me to get bored and start half watching for a while until the ending. The only major attractions of the film are the ending (after the bit that belonged in a PG or a U (to be honest, that bit was ripped off from Pokemon The First Movie!)) where you find out something that gives the film a perk towards a good horror, the brief scene of nudity and the violence. If you are the sad sort of person who only wants a little bit of violence, poorly chosen music for the setting, and A pair of breasts, then watch this. But for those people who have taste and want to watch a good horror film, let this movie sink like the Titanic!

This was not a scared-to-death type. Just another watchable horror movie. It had a good attention-catching starting but it got messed up eventually. I liked Emily Browning over here. She was cute.