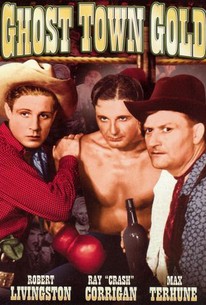 Ghost Town Gold was the second entry in Republic's long-running "Three Mesquiteers" western series. Ray "Crash" Corrigan and Robert Livingston return as Tucson Smith and Stony Brooke, while Max Terhune replaces Sid Saylor as Lullaby Joslin. Almost immediately, comic ventriloquist Terhune established a rapport with his two co-stars, though audiences could have done with a lot less of his garrulous dummy Elmer. As for the plot, our three heroes try to retrieve some stolen money before an innocent banker is blamed for the theft. Adding spice to the quest is the fact that the banker has a pretty daughter (Kay Hughes). Other highlights include a typical Republic saloon-brawl scene, in which Tucson cleans the clock of head-villain Frank S. Hagney.

I. Stanford Jolley
as Townsman
View All

There are no critic reviews yet for Ghost Town Gold. Keep checking Rotten Tomatoes for updates!

There are no featured reviews for Ghost Town Gold at this time.