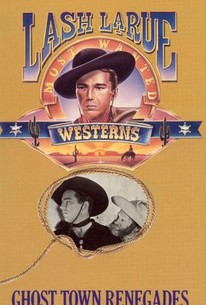 "King of the Bullwhip" Lash LaRue continues lashing away in the PRC western Ghost Town Renegades. In this one, the Cheyenne Kid (LaRue) and Fuzzy Q. Jones (Al St. John) investigate mysterious goings-on in an abandoned mining town. The villains have suddenly taken an inordinate interest in the town's played-out mine, and it looks like the mine's rightful owners will end up getting the shaft. But Cheyenne wields his whip in the last reel, forcing the bad guys to cower in submission. The better-than-usual cast includes Jennifer Holt (daughter of Jack, sister of Tim) as the heroine and William Fawcett, future costar of TV's Fury, in one of his "grizzled" characterizations.

Dee Cooper
as Henchman
View All

There are no critic reviews yet for Ghost Town Renegades. Keep checking Rotten Tomatoes for updates!

There are no featured audience reviews yet. Click the link below to see what others say about Ghost Town Renegades!