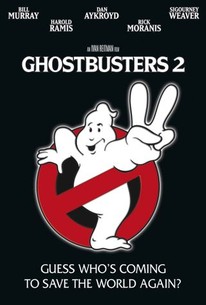 Critics Consensus: Thanks to the cast, Ghostbusters 2 is reasonably amusing, but it lacks the charm, wit, and energy of its predecessor.

Critics Consensus: Thanks to the cast, Ghostbusters 2 is reasonably amusing, but it lacks the charm, wit, and energy of its predecessor.

Critic Consensus: Thanks to the cast, Ghostbusters 2 is reasonably amusing, but it lacks the charm, wit, and energy of its predecessor.

Ivan Reitman's sequel to the phenomenally successful Ghostbusters is looser and more self-assured than the original. The film opens with a title reading "Five Years Later" and finds the ghostbusters living in hard times. A restraining order has forbidden the boys to partake in paranormal warfare, and as a result they have had to seek other lines of work. Ray (Dan Aykroyd) and Winston (Ernie Hudson) spend their time performing at children's' birthday parties, and Egon (Harold Ramis) is busy conducting experiments investigating the effect of human emotions on the environment, leaving ghostbusting behind. Venkman (Bill Murray) and Dana (Sigourney Weaver) have split up. Venkman now hosts a local cable show called "The World of the Psychic." Dana, now divorced and the mother of a little baby named Oscar, works as an art restorer in a museum -- and this is where the plot kicks in. While Dana is restoring a portrait of a 16th-century tyrant by the name of Vigo the Carpathian, the portrait becomes hexed. The evil Vigo wants to return to life by taking over the body of Dana's little child. Vigo has enlisted Dana's boss, Janosz Poha (Peter MacNicol), to compel Dana to cooperate. Soon dirty sludge and slime flow through the streets of Manhattan, and the ghostbusters have to reunite to save the city from a funky paranormal evil. ~ Paul Brenner, Rovi

Harris Yulin
as The Judge

Janet Margolin
as The Prosecutor

Mordecai Lawner
as Man with a Ticket

Catherine Reitman
as Girl with Puppy

Christopher Villasenor
as Brownstone Boy No. 1

Jason Reitman
as Brownstone Boy No. 2

Tom Dugan
as Restaurant Cop No. 1

John Hammil
as Detective No. 1

Ray Glanzmann
as Detective No. 2

Alex Zimmerman
as Detective No. 3

The sequel is, on the whole, a fairly mechanical spook show, filled with grinning ghosts that are definitely ghoulish but hardly menacing.

Almost as sharp as the first film and only suffering slightly from the inevitable repetitions.

Kids will find the oozing slime and ghastly, ghostly apparitions to their liking and adults will enjoy the preposterously clever dialog.

The film is largely an excuse for a cast get-together, with the Ghostbusters, under judicial restraining order after the havoc wreaked in part one, suffering lives of semi-obscurity.

In general, it has the same look and feel, but the energy and enthusiasm have waned.

Murray's in his prime here as one of four fearless slime fighters in a sequel that is just about as funny and entertaining as the original.

A rather underwhelming sequel...

An almost uniformly substandard follow-up that, since the original film remains so beloved by so many people, still gets to be disappointing even two decades and change later.

Plenty of agreeable nonsense to develop within the larger Ghostbusters universe. It's a sincerely amusing movie, warmly energized to give fans a steamy second helping of the good stuff.

Frankly, Murray, Sigourney Weaver and even Aykroyd deserve much better.

Several years after the success that was the first Ghostbusters, a sequel was made, and it is a film that often is considered by many people as a mixed bag. Me personally, I love it, sure it isn't as big of a fresh air or as funny as its predecessor, but the effects are still great, the comedy works well, the acting is still spot on, and the epicness factor is cranked up massively in this film in the last 25 minutes. Sure it does have some dumb moments, like Peter MacNicole turning into that ghostly Mary Poppins freak, but it still does work great, and Rick Moranis really seems to steal the show in terms of comedy and goofiness. In the first film he is just a forgetful nerd character, but in this film he has a much bigger role. The film isn't as big of a breath of fresh air as the first, but it is still very funny, and it is entertaining enough to keep you watching.

The original cast, director and writers return to the ghost mine again, but they bring a kind of smug self-assurance (faked in the original, but here in truth) that undercuts the comic proceedings. And so, like many sequels, it is not as good. Not as good as it is to see these old friends again, even though they are not as funny. The payoff ending sequence with the Statue of Liberty is downright embarrassing, it's so bad. One wishes that they've focused on Moranis, Potts and MacNicol and saved the big four for last. Ah well.

It's pretty tough for a sequel to best, let alone match it's predecessor, especially when the first one is an undisputed masterpiece. So yeah, Ghostbusters II isn't as good as the first, but it's not a bad film by any means. Unfortunately most people don't see it that way. Me, I really like this one, and think it's still a really decent film, even though it isn't what it could have been. The story begins five years after the first. Following the defeat of Gozer at the end of the first film, the Ghostbusters have actually fallen on hard times. Instead of being hailed as saviors, they have since been slapped with a restraining order and forced to cease their ghostbusting due to all the collateral damage their 'busting' causes. As a result, the four have hung up their proton packs and gone on to other activities. However, they are forced to get back to it when an evil ooze begins wreaking havoc, especially when it possesses a painting of an evil 16th Century Carpathian tyrant named Vigo, causing him to come to life to terrorize all who end up in his way. I think the main issue at hand here is sequelitis. It's just unable to capture the magic that made the first so special. It doesn't have the freshness, nor does it have the same level of laughs, wit, and energy. Ivan Reitman returned as director, and co-stars Aykroyd and Ramis once again wrote the script, and, while they don't do bad in these roles, their performances don't really stand out. I do however, like that they raised the stakes, and showed how actions have consequences. I just wish they could have come up with some more creative and stronger ideas. The music is still good though, and I still dig the effects, and yeah, the performances are fine, if slightly worn, but, even though this one has it's moments, it doesn't have near as much heart as it should. I'm still giving this one a really high rating though, as I'm a big fan, I like these guys and what they do, and it's still a fun and entertaining film. Yeah, some of it is a bit sillier, but I can't help but like it. Without a doubt, my main reason for really liking this is personal. Sentimentality is key here, as the earliest memory that I can recall is seeing this in the theater when I was a mere three years old. I can only recall one scene clearly, but still, it's a memory I want to cherish as long as possible. Bottom line: yeah, this is a step down, but it's still a pretty decent film, and offers a fair amount of entertainment, and, compared to a lot of sequels, it's quite strong, so give it a chance.

For a sequel to a masterpiece it couldn't possibly live up to, this is quite an underrated bit of fun. Not sure why so many hold it in such low regard, because I think it successfully maintains the spirit of its predecessor. Sure, the plot isn't as exciting and the main villain is kind of lame, but the wonderful wit and interplay is still very much intact, which is what counts in my book. I suppose Bill Murray is chiefly to thank for that though. You can't help but love his sarcastic, cynical and hopelessly womanizing character. His lines are so perfectly timed that you're wondering if he's not making it all up on the spot. At any rate, we can only hope that the intended third film (which now, perhaps for the best, looks doomed to become a non-event) won't ruin any of that. I mean, Hollywood has already managed to defile other 80's gems like Star Wars and Indiana Jones. If the same thing happens to the Ghostbusters franchise, I don't know what I'll do, but it ain't gonna be pretty. And by "not pretty" I mean something along the lines of Vigo's morning face.