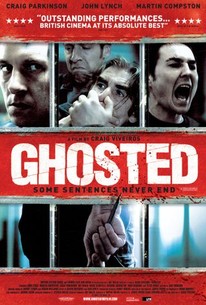 Ghosted is a hard-hitting, gritty prison drama starring a stellar cast of home-grown British talent including John Lynch (In The Name Of The Father), Craig Parkinson (Four Lions), Martin Compston (Disappearance of Alice Creed, Sweet Sixteen), David Schoﬁeld (Pirates of the Caribbean) and the internationally acclaimed Art Malik. Jack (Lynch) is a model prisoner, keeping his nose clean and serving his time, but on the anniversary of his young son's death, he receives a devastating blow as his wife ends their marriage. Paul (Compston) is the new kid on the block who quickly falls under the inﬂuence of psychotic "Baron" Clay (Parkinson). Jack must risk his own life and sanity to help the newcomer, but can he save Paul and himself in the process? With uncompromising performances and in your face violence, this is a tough and powerful tale of loss, survival, salvation and life in a British prison. -- (C) Revolver Entertainment

There's virtually nothing here that we haven't seen before; the best of it is the acting of a fine cast which also includes Art Malik and David Schofield.

There is an uncomfortable naivety in the film's assumption that violence, when practised by the righteous, can be cathartic or redemptive.

A porridge of prison movie clichés.

As is standard in reviews of prison movies, the Film Reviewers' Code obliges me to tell you "it's nowhere near as good as A Prophet". But even so, Ghosted's a top piece of work.

An overwrought and predestined misfire.

Muddled and sentimental, it is an unilluminating experience.

This film doesn't have much we haven't seen before but it does have strong performances from a cast which lift this above its sometimes predictable material.

Screwed isn't just low rent, it comes with a finale so daft that the writer deserves six months in solitary.

It's no Scum or Shawshank, but on its own modest terms, Ghosted is an engrossing watch that wrings new blood from old clichés.

It's well acted - especially by the underused Craig Parkinson as the resident psycho - but is by turns dull and unpleasant.

Ghosted is not out to set any benchmarks. But despite its more modest ambitions, nobody's going to shove it around.

There are no featured audience reviews yet. Click the link below to see what others say about Ghosted!