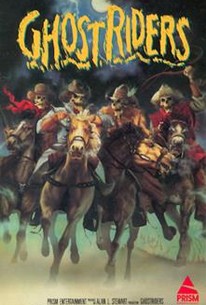 This inept Dallas-lensed supernatural silliness involves the ghosts of notorious Texas outlaw Frank Clements and his bloodthirsty gang, who return every 100 years as gunslinging ghouls to exact symbolic (and dull) revenge against the ancestors of the preacher who had them strung up in 1886. A few lame attempts at paranormal speculation and a poorly realized horror twist on Rio Bravo can't elevate this dreary backyard blunder above amateur status. Viewers looking for more interesting tumbleweed terrors may want to seek out the clever Charles Band production Ghost Town, released the following year.

There are no critic reviews yet for Ghost Riders (Ghostriders). Keep checking Rotten Tomatoes for updates!

There are no featured reviews for Ghost Riders (Ghostriders) at this time.