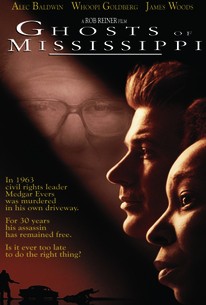 Critics Consensus: James Woods is convincing as a white supremacist, but everything else rings false in this courtroom drama, which examines a weighty subject from the least interesting perspective.

Critics Consensus: James Woods is convincing as a white supremacist, but everything else rings false in this courtroom drama, which examines a weighty subject from the least interesting perspective.

Critic Consensus: James Woods is convincing as a white supremacist, but everything else rings false in this courtroom drama, which examines a weighty subject from the least interesting perspective.

Darrell Evers
as Himself

James Van Evers
as Himself

John A. Horhn
as CNN Reporter

Ed Bryson
as Himself

Maggie Wade
as Herself

Critic Reviews for Ghosts of Mississippi

I've grown increasingly restive at such films as Mississippi Burning, A Time to Kill, and Ghosts of Mississippi... All three films celebrate the heroism of white law officers in prosecuting racist killers.

Strong performances but just another movie about civil rights issues that pays too much attention to the white characters.

It closes a chapter in history, but scarcely brings it to life.

Rob Reiner's self-congratulatory Ghosts of Mississippi portrays Medgar Evers' slaying from the viewpoint of a white guy and can't even do a capable job of that.

Strangely devoid of any emotional weight.

Convincingly plumbs the spiritual impules behind the yearning for justice.

Audience Reviews for Ghosts of Mississippi

Inspiring true story. Goldberg was flawless in her role.

This is one of my favorite historical movies ever made. What I really love about this film is just how accurate it is. The film is based on a book written by the prosecutor, Bobby DeLaughter, and before the film was made, all the actually people involved were interviewed and allowed to give their input into how their characters were developed. The story takes place in 1990 and is about the third re-trial of the man accused of killing civil right leader Medger Evers in the 1960's. Alec Baldwin portrays the prosecutor, and while I am by no means a fan of his, he was truly great in this film. I wish he'd stick to roles like this instead of trying to be funny, because he's not funny. Whoopi Goldberg, remains one of the most underrated actresses in Hollywood and was just amazing here. This is a top notch, historically accurate drama that every history buff needs to see. I honestly can't recommend it enough!