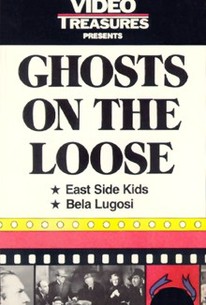 Ghosts on the Loose Photos

Ghosts on the Loose (which features no ghosts whatsoever) is perhaps the best-known of Monogram's "East Side Kids" series. This time, Muggs (Leo Gorcey), Glimpy (Huntz Hall), and the rest of the kids offer to decorate the honeymoon cottage of Glimpy's sister, Betty (Ava Gardner), and her new husband, Jack (Rick Vallin). Unfortunately, the boys end up at the wrong house, a sinister mansion that serves as the headquarters for a Nazi spy ring headed by Emil (Bela Lugosi). The rest of the film is an extended chase -- first the Nazis chasing the boys, then the boys chasing the Nazis. Incidentally, this is the film in which Bela Lugosi allegedly sneezes out an obscenity. Ghosts on the Loose has been reissued under several titles, notably The East Side Kids Meet Bela Lugosi.

Critic Reviews for Ghosts on the Loose

There are no critic reviews yet for Ghosts on the Loose. Keep checking Rotten Tomatoes for updates!

Audience Reviews for Ghosts on the Loose

More Dead End (Bowery Boys) silliness as they try to help newlyweds into their new digs, only to discover that next door is a haunted mansion. What kind of kooky insanity will ensue now? Bela Lugosi arrives in time to pick up a check, but otherwise has little to do here. Was Ava Gardner in this as well? Fan of their antics = a good time, but kid stuff on the main.

As a chance to see the momentary collision of an incredibly young Ava Gardner just beginning on her way up and The Bowery Boys and Bela Lugosi on their way down this is an okay little hour but it's second (or third) rate in every other way.

This movie is partly funny and partly stupid. Maybe kids would like it?

Ghosts on the Loose Quotes