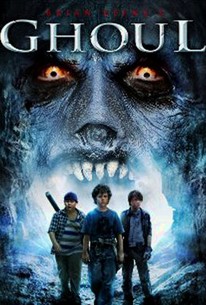 Something ghastly haunts Golgotha Cemetery - an entity of unspeakable evil...and insatiable hunger. It is the summer of 1984, a time that should be full of lazy, carefree days for 12-year-old Timmy (Modern Family's Nolan Gould) and his two best friends, Doug and Barry. But when a teenaged couple goes missing among the gravestones of the local cemetery, the bloodcurdling legend of a horrific ghoul begins to seem more like reality than myth. As the body count rises, Timmy and his friends are forced to confront their worst fears when they unearth long-buried secrets and unleash not only their personal demons...but also the one lurking underground! Based on the novel by Brian Keene comes GHOUL, a tale of terror about the convergence of monstrous inhumanity and a ravenous, inhuman monster.

It's quite the watch, even if the final half drops the ball completely.

There are no featured audience reviews yet. Click the link below to see what others say about Ghoul!