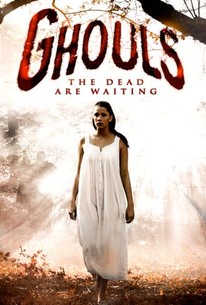 William Atherton, Erin Gray, James DiBello, and Kristen Renton headline this horror film concerning an American college student who makes a horrifying discovery about her supernatural heritage while traveling through Eastern Europe in search of her family. Upon receiving news that her long-lost Romanian grandmother has died, American student Jen (Renton) and her father (Atherton) book a flight to the old country in order to properly pay their respects. Once there, Jen meets a mysterious ghost hunter who claims that the local woods are haunted by horrifying mystical creatures that prey on the innocent locals. Upon discovering her connection to the evil creatures that plague the remote town, Jen and her brave new companion must team up to prevent the ghouls who once ruled the planet from realizing their plans to once again claim the Earth as their own.

Roxanna Raluca
as Adriana
View All

There are no critic reviews yet for Ghouls. Keep checking Rotten Tomatoes for updates!

Meh. The plot was just...too dull. It doesn't know if it's medival, or modern times. The acting wasn't so great, either. But I loved the ghouls. There were some pretty interesting ghoul-looking figures in here, I gotta admit.

This movie is so TV, About a young girl who goes to Rominia with her father. See is the vessel for the ghoul queen, Lame, It only gets 1 Star. This had to be a mistake. Dam Netflix