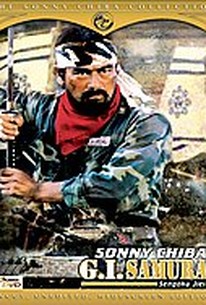 Transported 400 years into the past after falling into a mysterious time slip, a squadron of contemporary Japanese soldiers becomes caught between two warring samurai clans fighting to determine who will be the supreme Shogun. As the fighting between the rival samurai clans intensifies, squadron leader Lt. Iba (Sonny Chiba) makes his bid to become the ultimate ruler of Japan by teaming with the samurai leader Kagatori. Kagatori realizes that he can win the war by using the weaponry of the time traveling soldiers to his advantage. Should he succeed, Kagatori and Lt. Iba will together shape the future of an entire nation. ~ Jason Buchanan, Rovi

There are no critic reviews yet for G.I. Samurai. Keep checking Rotten Tomatoes for updates!

There are no featured audience reviews yet. Click the link below to see what others say about G.I. Samurai!