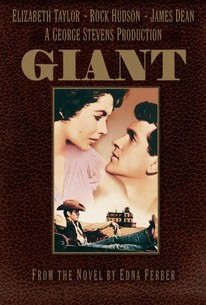 Victor Millan
as Angel Obregon I

Christine Werner
as Luz as an Infant

John Garcia
as Angel as an Infant

Including a fine performance from Elizabeth Taylor, great acting from Rock Hudson and a piercing portrayal from James Dean. Giant stands shoulder-to-shoulder with the great ones.

Giant, in spite of its length, seldom seems long -- its story is too eventful, its effects too picturesque, and its director too skilful for that even over so long an expanse of time. It may not be a great film but it is certainly an awesome one.

An excellent film which registers strongly on all levels, whether it's in its breathtaking panoramic shots of the dusty Texas plains; the personal, dramatic impact of the story itself, or the resounding message it has to impart.

Much of it is awful, but it's almost impossible not to be taken in by the narrative sprawl.

Let me say it right away: this film is a disappointment, at least relative to what we had hoped for.

If Stevens intended Giant as a great work of art, serious doubts arise as to both his artistic judgment and his ability to rise above the level of his material.

Dean's unstrained authenticity is remarkable, made more amusing when it conceals intellect and a ferocious ambition.

Edna Ferber's sprawling yarn about life in Texas has its share of corn, and so has the film, but master director George Stevens has put it all together with vitality and insight.

Giant (1956) is a sprawling, grandiose and iconic western epic and melodrama based on Edna Ferber's celebrated 1952 novel. It told about two generations of a wealthy American cattle ranching family in Texas spanning a twenty-five year period

The combination of director George Stevens and source novelist Edna Ferber, both given to expressions of overblown high seriousness, yields a long, slow, achingly self-important movie.

A film that lives up to its title, truly grand in scope and (unfortunately) in length. Though it's beautiful to look at and though the acting - particularly by James Dean and Elizabeth Taylor - is quite accomplished, many scenes don't do a lot to advance the plot, and many subplots come off as extraneous. I liked that this was a sort of love letter to Texas, a take-it-or-leave-it account of the frontier spirit and the state's growing pains, and the concern for what happens when that trail-blazing mentality becomes cold competition two or three generations down the line. The film was setting up to be a tragedy, and almost delivered in a way that would've made American Shakespeare of it, but it opted for the anti-racism angle in the end; though I'm sure that broke ground in 1956, assessing it from a story standpoint instead of a social one, the ending - in fact, the last half-hour or more - gets away from what the story was about: ambition. The film is in a way a lot like its central character, falling flat on its face in the end due to its grandiose objectives, but to sustain my attention for over three hours, it had to have done something right. Just compelling enough to not turn off, and something you should make yourself watch, but it's wishy-washy for an epic and it's just not all that it's cracked up to be.

George Stevens is lucky he made this when he did, since I doubt he'd have been able to get away with making a film that favored storytelling over running time in this day and age. Yeah, that's right, this sucker is 210 gloriously excessive minutes of soapy melodrama on a grand scale, covering the lives of a few generations of rivalry and love between old money Texas cattle barons and new money Texas oil tycoons during the early 20th Century. It touches upon an interesting bit of Texas history, and deals with issues of racism, classism, and female independence as well, although these last three issues don't come as revolutionary like they did in 1956. This is a sprawling film, and, though it does have some really good moments, I hesitate to call it a classic. It's overlong (in places), really soppy and melodramatic, a bit dated, and doesn't have the weight it could. I sure as hell dug the production aspects though, that's for sure. This sucker as great cinematography, wonderful sets and costumes, decent music, and some excellent shooting locations. Oh yeah, and the performances are pretty decent, too. You've got young Elizabeth Taylor putting in some solid work, a decent turn from Rock Hudson, and James Dean in his final film (he died a few days after he finished shooting his scenes) knocking it out of the park in a very histrionic performance as the rugged rogue. There's also young Dennis Hopper and scene stealing Mercedes McCambridge. All in all, a decent film, but nothing truly remarkable beyond the surface. It's definitely deserving of the title epic though, even if it is fluff.

A brave, and epic film for its time. You cannot help but be amazed by its bold message, it's strong acting, and the amount of issues he tackles in this film.

It might not be one of the greatest movies ever made, but it's sure important. While it might appear to be a love story on the outer shell, this is really about class structure and racism. Elizabeth Taylor's crusade as a humanitarian stretches over 25 years, as does her struggle with her marriage and family life. When you look at James Dean's Jett, all he wanted to do was to become as rich and powerful as Bick so he could win the heart of Leslie when that was something she never admired about her husband to begin with. All the side-characters, scenery, thickness and rich storytelling really pays off. You almost feel like a Benedict by the end of the movie. The conclusion in the diner is one of the greatest and most rewarding build ups in movie history.