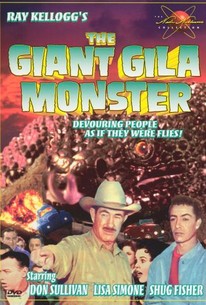 In The Giant Gila Monster, most of the plot is given over to a group of hot-rod enthusiasts, headed by nice-guy Chace Winstead (Don Sullivan), who sometimes breaks into song. Before long, the titular gila monster, which is just that -- a real gila monster -- is lumbering about on miniaturized sets terrorizing the community, killing at random, knocking over trains and barns, and in general making a nuisance of itself. When the monster threatens to devour Chace's kid sister, he attempts to dispatch the beast with a hot rod full of nitroglycerin. The Giant Gila Monster was originally released on a double bill with The Killer Shrews.

Desmond Dhooge
as Hitchhiker
View All

Has a real-life lizard (looking as disinterested as hell!) harassing scale models . . .

Camp value is provided by a truckload of 1950s B-movie cliches and dreadful song breaks -- "The Gila Monster Crawl" among other "rock & roll hits" -- by its lead, Don Sullivan, who through this movie rose from nothing to complete obscurity.

made on a shoestring budget and it shows; bad blend of teenagers, rock music and silly lizard on patently faked sets.

From the Blood Soaked Cinema Collection (12 Video's from Brentwood Home Video). As a monster movie, this is far from the best, but as a look at life in 50's rural Texas, it's top notch. The settings are authentic and realistic and the people talk like real people. Especially good is Fred Graham as the kind-hearted Sheriff...the opposite of the way most cops were portrayed in teen movies. Don Sullivan is not bad at all as hero Chase, a decent kid who just happens to love racing fast cars. With the exception of the rich Dad, everybody in the movie seems decent. As for our title monster, he's pretty sleepy looking, but I always thought Gila Monsters were pretty cool. The somber, eerie background music helps this one a lot. Speaking of which, some of Sullivan's singing is OK, but "Laugh, Little Children" should be taken out and shot. If the effects had matched the rest of the movie, it would have been a minor classic. As it is, it's a fun "time capsule" type movie. 3 1/2 stars 6-10-13

Another giant monster movie, nothing special, I didn't like this movie at all.

Yet another ridiculous "mutant creature" from the atomic age of horror. Painfully cheesy at times, but kinda fun if you aren't expecting much. Though I would only recomend it if you can see it as part of Elvira's Movie Macabre, with all of her "side notes" and commercial break "asides".