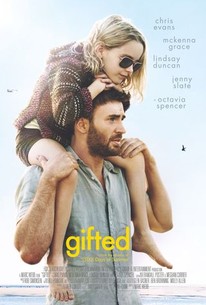 Critics Consensus: Gifted isn't quite as bright as its pint-sized protagonist, but a charming cast wrings respectably engaging drama out of a fairly predictable premise.

Critics Consensus: Gifted isn't quite as bright as its pint-sized protagonist, but a charming cast wrings respectably engaging drama out of a fairly predictable premise.

Critic Consensus: Gifted isn't quite as bright as its pint-sized protagonist, but a charming cast wrings respectably engaging drama out of a fairly predictable premise.

Frank Adler (Chris Evans) is a single man raising a child prodigy - his spirited young niece Mary (Mckenna Grace) - in a coastal town in Florida. Frank's plans for a normal school life for Mary are foiled when the seven-year-old's mathematical abilities come to the attention of Frank's formidable mother Evelyn (Lindsay Duncan) whose plans for her granddaughter threaten to separate Frank and Mary. Octavia Spencer plays Roberta, Frank and Mary's landlady and best friend. Jenny Slate is Mary's teacher, Bonnie, a young woman whose concern for her student develops into a connection with her uncle as well

Candace B. Harris
as Carly Rosen

Will Buie Jr.
as Boy

It's good to see [Marc Webb] back working on more intimate material, even though Gifted isn't entirely satisfactory.

Gifted is not your run-of-the-mill melodrama. More like an exceptional melodrama. It still plays the violin, if you get what I mean, but the violinist is skilful.

Emotional manipulation gets a bad press. But, hey, sometimes being milked for tears is fun.

There's enough believable chemistry between Evans and Grace for it all to work.

Films that are so good in so many ways do not come around very often.

Please, go see Gifted. It may not be a perfect movie (the court scenes are too long) and unapologetic about manipulating your emotions but the giftedness celebrated in the story is well worth it.

A film can rise or fall entirely on its screenplay, and in portraying the struggles of smart people, Gifted comes across as very, very dumb.

Gifted isn't a brilliant film, but films don't always need to be brilliant.

Like Evans himself, the film is a good-natured, easily likeable experience that may not test convention, but plays out in a satisfying and affecting manner.

While there are glimpses of subtlety within this film, it is all together too slight and surface-level. It is a light-hearted bit of sentimental fluff that fans of Evans will enjoy and there is even a bonus one-eyed cat.

Te concept of the new film from director Marc Webb seems deceptively simple, but as Tom Flynn's deft screenplay (plucked from the 2014 blacklist) scratches the surface, things get complicated and often painful.

Predictable and yet competently brought to the screen account of what it might be like raising a genius-to-be. While everyone does their job it's the little Einstein, Mckenna Grace, that keeps our focus from wandering.

Gifted is a charming little bauble of a movie. Chris Evans turns in a nicely different performance here, apart from his Captain America days. McKenna Grace absolutely knocks it away with a commanding performance sure to make her known. What Gifted does so well is by balancing its drama out as to not get too sentimental but instead pluck lightly at the heartstrings with its predictable courtroom tension. There isn't much to Gifted but its nicely directed by Marc Webb and warm and moving when it needs to be and wisely avoids sentimentality. Rating: 74

McKenna Grace out acts many in this cast.

Chris Evans has always been a favourite of mine. Steve Rogers/Captain America aside, he has really come to his own in the realm of independent cinema as well. Whether it be in directing himself in the very small, yet sincere Before We Go, or kicking some serious ass in films like Snowpiercer, his range has been tested quite a bit. That being said, I truly don't think he has ever been better than his performance in the Marc Webb directed Gifted. After directing (500) Days of Summer, getting hired to helm The Amazing Spider-Man, only to be critically and slightly financially disappointing, director Marc Webb has once again found himself directing an independent film. Happily, I can say that this is where he belongs. Small, character-driven stories truly seem to be his forte. Although predictable, here is why I believe Gifted isn't receiving nearly enough recognition. Whether or not light-hearted films that exist solely to put a smile on your face and possibly even make you shed a tear annoy or not, Gifted is without question, an effective picture as a whole. After the passing of her mother, young Mary is soon discovered to be a mathematic prodigy. Not wanting her to be swept up in her talents and miss out on her childhood, her uncle (also her guardian) does the best he possibly can in making the right decisions. In this very simple and straight-forward film, there is quite a bit more emotion present than I was expecting. Not only does this story feel grounded in reality and not ridiculous in any way, but the performances were all terrific across the board. As seen throughout (500) Days of Summer and even between the chemistry between Andrew Garfield and Emma Stone in The Amazing Spider-Man films, director Marc Webb has always felt at home when directing his performers. From Chris Evans, to young McKenna Grace, to even the interaction between Evans and Jenny Slate, I couldn't find a single issue with the performances here. I found myself swept up in this story, due to the fact that everyone seemed to be giving it their all. Gifted is filled with a terrific cast, making this average film much stronger in the end. If it wasn't for the commitment from the entire cast, I'm not sure I would've been as moved during my viewing of this film. When it comes to premises involves child prodigy's, this genre has been done to death. For this reason alone, it really does come down to its characters and whether this type of premise can still have a hook. As I said, I was swept up in this film from beginning to end, but I did find myself calling every shot. From every decision Frank (Evans) would make, to where Mary (Grace) would end up in the final moments of the film, there was nothing surprising whatsoever, but I also believe that was precisely the intention of the filmmakers here. Never once did anything feel inauthentic. The film devotes itself to its story and never lets go of what made it important from the first act. In the end, I truly feel as though the script of this film couldn't have been much better than it was. For being incredibly simple, the dialogue between these characters felt very authentic and many of them share some pretty memorable exchanges. I am very happy to see Marc Webb back in his wheelhouse and I really hope he continues to make smaller films like this. Gifted is a very solid film from beginning to end. Aside from it losing a bit of pacing in the second act and becoming incredibly predictable, the effectiveness of the overall film easily trumped those flaws in my humble opinion. If you are looking for a solid human story or just enjoy a well-made drama, I feel no shame in saying you won't regret your decision in checking out Gifted. I enjoyed this film just as much as I hoped I would. Predictable, but very effective.