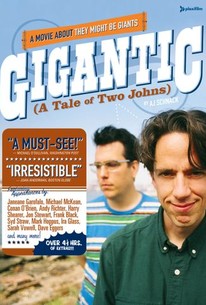 Critics Consensus: A clever, absorbing documentary about They Might Be Giants, a musical duo whose brainy, idiosyncratic brand of pop has earned them decades of cult success.

Critics Consensus: A clever, absorbing documentary about They Might Be Giants, a musical duo whose brainy, idiosyncratic brand of pop has earned them decades of cult success.

Critic Consensus: A clever, absorbing documentary about They Might Be Giants, a musical duo whose brainy, idiosyncratic brand of pop has earned them decades of cult success.

John Flansburgh and John Linnell are a pair of musicians who met when they were fellow junior-high misfits in the town of Lincoln, MA. Sharing a fondness for off-center pop music and absurdist humor, the pair decided to form a band, and later moved to Brooklyn, NY, in search of their big break. Adopting a rather unusual two-man lineup (guitar and accordion accompanied by a drum machine), the duo began performing as They Might Be Giants, and their shows were part concert, part performance art, and part edgy comedy. Slowly but surely, They Might Be Giants became one of the biggest bands on the alternative rock scene, and while they never threatened to break into the upper reaches of the Billboard charts, they've managed to develop a loyal cult following, and after nearly 20 years together, are still recording and performing their one-of-a-kind songs on their own terms. Gigantic (A Tale of Two Johns) is a documentary which looks at the long and sometimes strange history of They Might Be Giants, featuring extensive interviews with Flansburgh and Linnell; thoughts from fellow musicians Frank Black and Syd Straw; endorsements from noted authors Dave Eggers, Gina Arnold, and Michael Azerrad; and readings of the group's lyrics from actors (and fans) Harry Shearer, Janeane Garofalo, Michael McKean, and Annette O'Toole.

Prepare yourself for nights wandering around the house singing unshakable tunes.

The flabby, fawning film Gigantic comes across as 102 minutes of rib-nudging by one of the duo's annoyingly self-satisfied connoisseurs.

Predictably, Flansburgh and Linnell are the saving grace of the movie, both in their interview segments (refreshingly witty, although the editing could have been tighter) and particularly in the live footage.

Tries to be as irreverent and bouncy as a song by its subject, and succeeds for the most part.

As tooting-your -own-horn documentaries about innovative alt-rockers who've been around for 20 years go, Gigantic: A Tale of Two Johns goes very well indeed.

Gigantic documents how much work goes into the making of twee music.

Gigantic may not be as different a music movie as it thinks it is, what with its by-the-book fluffiness. But that's OK, really, since it's a fun watch anyway.

Engrossing, fun and oddly touching, Gigantic makes you wish the best for these guys.

Suffers the same banal fate of most band documentaries. It's essential for rabid fans but even ordinary ones will live rich and meaningful lives without ever having seen one minute of it.

As a film, Gigantic is excessive and poorly structured.

There are no featured audience reviews yet. Click the link below to see what others say about Gigantic!