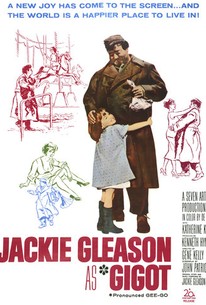 Gigot (Jackie Gleason) is a mute Parisian janitor trying to make ends meet with odd jobs in this whimsical comedy. He shares his squalid home with a prostitute and her young daughter after finding them in need on the streets. The eccentric Gigot spends his spare time attending funerals for a source of inexpensive amusement. Beloved by children and animals, his simple disarming manor endears him to his neighbors as the silent but determined man who rises above life's problems with unusual resolve. Produced by Gene Kelly, the idea for the story and music for the film are Gleason's and showcases the actor's talents in this delightful tale in which actions speak louder than words.

Frank Villard
as Pierre
View All

Not mutton but ham was the meat that kept floating past my eyes while watching Jackie Gleason groping around for an Oscar in the Paris gutters.

Nothing but a vanity project for Jackie Gleason. The concept and story is his. The overbearing musical score is his. He's onscreen nearly all the time.

Jackie Gleason gives a heart-wrenching performance as a kind, mute janitor who befriends a little girl in the slums of Paris. Written by Gleason himself as a tribute to his idol, Charlie Chaplin, Gleason was himself so honored when William H. Macy reprised the role of Gigot in a made-for-TV movie called The Wool Cap [2004].

Written and directed by Gleason,this film is heartwrenching and funny,poignant and touching. Jackie Gleason plays a deaf mute,who befriends the neglected little daughter of a french prostitute.What an incredible role for Gleason to show his talent for acting-facial expressiveness and body language alone-stellar.