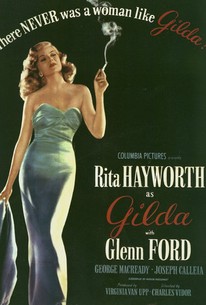 In this film noir, Rita Hayworth stars as the sexy wife of crippled casino owner George Macready. She is also the former love of gambler Glenn Ford, who takes a job in Macready's Buenos Aires casino. Macready goes out of his way to throw the two of them together.

Robert Kellard
as Man at Masquerade

Bob Board
as American

Sam Ash
as Gambler
View All

87 Fearless Women Movie Heroes Who Inspire Us
13 Barrier-Breaking Hispanic Stars and Their Most Celebrated Roles
On DVD This Week: Straight Outta Compton, Everest, and More

Heralded as a new team in motion pictures, Rita Hayworth and Glenn Ford are off to a flying start in Gilda.

The captivating Miss Hayworth turns in what is perhaps her best performance as the reckless Gilda.

Not since the archaic days of Theda Bara and her brazen ilk has sex appeal been set forth in so rampant a fashion on the screen.

If it's escape you want in a movie, you will find surcease from the worry of today's scary headlines at the Music Hall, where Rita Hayworth and Glenn Ford are pitted against each other in a lusty battle of hate and love.

Staggering around with this plot on their shoulders, the players, all of them competent, have a lot of trouble being convincing, particularly with the dialogue provided.

It's really good pulse-tingling cinema presented in good adult taste but there are sequences from which adolescents might draw the conclusion that all that shimmers is not heavenly light.

Overlook the confusion of plot, and the loose ends and you'll find diversions to keep you awake. Chief among these, of course, is Rita Hayworth.

Chock full of action and plenty of torrid feelings.

The photography is excellent, and shows an improvement in this Hollywood department which is be coming increasingly noticeable.

For an hour or so the spectator has been sufficiently beguiled by the prevailing air of mystery... But about this time he may begin to have a nasty suspicion, subsequently confirmed, that nothing is going to happen except Miss Hayworth.

Completely disregarding the very obvious and eye-appealing fact, that Rita Hayworth is one of the world's most beautiful women, we are going to award her our personal accolade for also being one of the most dynamic and distinguished actresses.

A sumptuously sordid story about crime, major and minor, in Buenos Aires.

It is easy to just enjoy the gorgeous sight of Rita Hayworth exhaling beauty and sensuality, but let's not overlook how stupid, implausible and misogynist this film really is, painting Gilda as a mischievous femme fatale when in fact she is a victim in the hands of two hideous men.

Post-war greed, tempting women, and dark souls collide in the seductive Gilda. In a world ablaze in celebration, director Charles Vidor suggests that even amid all of the gaiety, exists a group whose tortured existence is ruled by deceit. Men and women, looking to forget their past misfortunes, begin to amass new fortunes at the expense of others. Even strangers in the street allude to the fact that they are becoming immune to human compassion. The man in this particular tale is Johnny Farrell, played by the always excellent Glenn Ford. Farrell, a man who likes to think that he "makes his own luck", spends his days narrowly escaping one quagmire after another, only to find himself hastily picking up the scent of the next big score. During his ascendancy in a cartel under the partronage of Ballin Mundson, his world is turned upside down by the dazzling and vivacious Gilda, played by Rita Hayworth, who happens to be Mundson's newly betrothed. While both men previously acknowledge that women and gambling don't mix, they both cannot seem to ignore this high stakes game. As soon as Rita Hayworth flips her hair back, you know she is trouble. She just oozes sexuality and I even found myself lured in by all of her celebrated, albeit achromatic, features. Farrell's contempt for Gilda is twofold. First off, he doesn't like her because it is revealed that they have a torrid history together. Secondly, and of prime importance in my opinion, Farrell sees too much of himself in her. Jumping from opportunity to opportunity, looking for the next path to fortune, Gilda is a manifestation of Farrell's ethos. Which draws both Farrell's fascination and ire. In one of their more passionate exchanges, Farrell accuses of Gilda of using Mundson for personal gain, to which she responds "That wouldn't be the big pot calling the little kettle black, now would it?" They develop a deeply passionate love/hate relationship that brilliantly taps into the duality of a post-war mind. Vigor accents these themes with his use of shadows. Often Gilda and Jonny are cloaked in darkness. If they do happen to be seen in the light, their shadow is sure to be close by, prowling in the background. In one outstanding scene, when Jonny and Gilda appear to have been found out by Mundson, Vidor frames the shot so the cuckold is close to the camera, a large shadow looming in judgment over the accused. In the same shot, Gilda walks to the back of the frame before addressing her husband, drenching herself in darkness. Vidor's visual language gives a whole other meaning to the term "shady people." It is not a perfect story. In fact, I found the ending to be rather slapdash and saccharine. Yet, it is quite an entertaining sexually charged noir. If nothing else, it will help you better understand what had all of the men gawking in "The Shawshank Redemption. "

The camera was in love with Rita Hayworth and she made sure we noticed it. One of the best noirs out there with probably the most strange case of a mènage a trois ever seen in a Hollywood pic.

"This is the part I really like, when she does that shit with her hair." Red - Shawshank Redemption