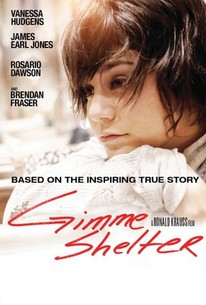 Critics Consensus: In spite of its obvious good intentions -- and the compelling true story that inspired it -- the heavy-handed Gimme Shelter can't overcome its cliche-riddled script.

Critics Consensus: In spite of its obvious good intentions -- and the compelling true story that inspired it -- the heavy-handed Gimme Shelter can't overcome its cliche-riddled script.

Critic Consensus: In spite of its obvious good intentions -- and the compelling true story that inspired it -- the heavy-handed Gimme Shelter can't overcome its cliche-riddled script.

Based on a true story that centers on 16-year-old Agnes "Apple" Bailey (Vanessa Hudgens), Gimme Shelter uncovers the struggle for survival and the hope of redemption through the harsh realities of life on the streets. As a pregnant teenager, Apple's journey plummets her into a perilous struggle until finding salvation in a suburban shelter for homeless teens. With provisions of unprecedented comfort, a collective sisterhood connection and female empowerment, the shelter elevates Apple to break the shackles of her past and inspires her to embrace the future with clarity, maturity and hope not only for herself but her unborn child. (C) Roadside Attractions

There's a whole [other] film to be made [...]-one driven less by hysterics and villainous mother figures, and more by examples of how charity and compassion can turn dead ends into doorways-but Gimme Shelter doesn't seem to want to make it.

The result is awkward, hyped propaganda for faith-based initiatives and against abortion.

What remains is a poor man's Precious, with all the earlier film's go-for-broke melodrama but none of its weirdness or empathy for the impoverished.

An after-school special blown up on the big screen, it stridently aims to inspire you. More likely, it'll make you cringe.

Hudgens captures both the defiance and fear of a girl at this crossroads. Her performance elevates what's often a trite and heavy-handed script.

An affecting drama that shows us the resilience and courage of girls who have to learn very quickly to be the loving parents they never had.

Even as co-stars and narratives turn to mush around her, Hudgens is a driving force, and so it is that Gimme Shelter is extremely worthwhile to see for her work here, especially if you've not seen some of her similarly themed roles.

Gimme Shelter was clearly made with good intentions, and if nothing else, Krauss and Hudgens deliver their message with conviction. Problem is, the vessel they've constructed to deliver said message is chock-full of holes.

The great performances are what fuels this film and you can tell that Hudgens and Dawson really pour all they have into this movie.

The performances make Gimme Shelter... well worth viewing despite a narrative hiccup or two.

A gritty, unvarnished portrait of the have-nots, Gimme Shelter with Vanessa Hudgens marks a distinct upgrade in the actress' profile.

This drama written and directed by Ron Krauss was based on true events and could be taken as an inspirational film for most viewers. Starring Vanessa Hudgens wasn't a bad choice for majority of the scenes, except the emotional ones where crying was involved! She was terrible in those. Nothing special in this predictable story of redemption that happens like through fast forward, and you won't have time to even sympathize with the girl who only seems to be in peril briefly - bailed out very quickly by her rich dad. Yes, we could try to be drawn to the hardship of Apple, a pierced, pregnant teenager who flees her volatile, drugged-out mother (brilliantly terrifying Rosario Dawson). She manages to track her father she's never met (Brendan Fraser) who as a scared teenager, abandoned her. Of course, now he works on Wall Street, married with a sceptical wife and two kids of his own... but he's willing to take her in and help her - under a condition that she terminates her pregnancy... Writer/director Ron Krauss will manage to take us through the film with some unnecessary steps to the shelter, where Apple must learn trust and cooperation to function as part of a loving if unconventional family. I already said few words regarding the acting of Vanessa Hudgens and Rosario Dawson, and for Brendan Fraser nothing good this time - too bland and boring... not far from the priest acted by James Earl Jones. If you can disregard the acting, directing and writing, maybe you will find something of interest in it! Cheers...

Sometimes you have to leave home to find your family. Good Indie Film! Even though a low budget film, Vanessa Hudgens is stunning on her performance as Apple. She proves that she has completely left her amateur puppy Disney High School Musical acting and moved on to bigger future roles that will certainly give her a lot of career options. Gimme shelter, in general, is an indie film that captures all the phases of a difficult life in the streets of a city. Maybe a little bit of 8 Mile or Precious, Gimme shelter reminds a bit of these films, but the motion picture still keeps its originality of story and of course performances. 16 year old street-wise Apple (Vanessa Hudgens) has never had an easy life. Her mother, June Bailey (Rosario Dawson), is an addict and prostitute, is verbally and physically abusive, and is grooming her daughter to follow in her footsteps. Apple knows the streets, alleys and motels like the back of her hand but wants more from her life. She possesses a tenacious, tough, indomitable spirit, and will not surrender to fate. Apple runs away from her mother and tracks down her father whom she has never known, as he was only 19 when he got Apple's mother pregnant. Apple begs her now Wall Street Broker father, Tom Fitzpatrick (Brendan Fraser), to take her in. In the few days under her father's care, she learns she's become pregnant by a kid from the streets she met on the train, who now wants nothing to do with her. She is forced to leave her father's home because of her choice to give birth to the baby she is carrying. Apple runs away again, and is eventually taken under the wing of Father McCarthy (James Earl Jones), the chaplain of the local hospital after almost getting herself killed. He offers to let Apple live at a shelter for pregnant young women run by a spiritual woman named Kathy (Ann Dowd). It is here that Apple begins to tentatively interact with the other girls who are in the same predicament as she and gradually begins to make a family for herself.