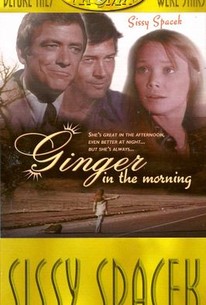 Ginger in the Morning Photos

Veteran art director Gordon Wiles occasionally wielded the directorial megaphone in both films and television with mixed results. Ginger in the Morning is an aggressively "small" picture, its success or failure totally reliant on the rapport between its stars. A young Sissy Spacek plays the title character, a gangly teenaged hitchhiker who thumbs a ride from travelling salesman Joe (Monte Markham). He is drawn to her free-spirited outlook on life. She, in turn, is attracted by his conservative, old-fashioned values. Nothing much happens, but the scenery is lovely and the leading players seem to be having a good time. Also appearing in the all-TV supporting cast are Susan Oliver, Mark Miller and Slim Pickens.

Beatrice Kay
as Lady in Park
View All

Critic Reviews for Ginger in the Morning

There are no critic reviews yet for Ginger in the Morning. Keep checking Rotten Tomatoes for updates!

Audience Reviews for Ginger in the Morning

I liked this one a lot. Nice little story, and I was impressed with both Sissy Spacek's acting, what a likeable character!, in it and that she wrote and sung all the songs in the movie. Anyone who likes 70's movies or even stories about socially awkward people getting together should enjoy this one.

Ginger in the Morning Quotes