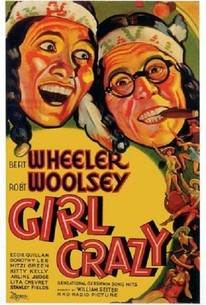 The 1930 George & Ira Gershwin musical smash Girl Crazy was refashioned for the screen in 1932 as a vehicle for comedians Bert Wheeler and Robert Woolsey. Most of the original play's romantic plotline has been jettisoned, shifting the emphasis to cabdriver Jimmy Deegan (Wheeler) and his larcenous passengers Slick and Kate Foster (Woolsey and Kitty Kelly). After a tortuous cross-country trip, Jimmy, Slick and Kate end up in Custerville, Arizona, where each of the new sheriffs is routinely bumped off by local reprobate Lank Sanders (Stanley Fields) and his gang. When the newly-opened nightclub of city slicker Danny Churchill (Eddie Quillan) proves successful thanks to the singing talents of Kate Foster, Lank Sanders, owner of a rival cabaret, plots to run for the sheriff's office so that he can close down Danny's establishment. Hoping to stave off this eventuality, Danny conspires with Slick to nominate Jimmy as sheriff (Slick figures that a dead man won't be able to collect his gargantuan cab fare!). With the help of his tagalong kid-sister Tessie (Mitzi Green), Jimmy wins the election then has to run for his life when Lank comes a-gunnin' for him. Ending up south of the border in Mexico, Jimmy and Slick manage to get the drop on Lank, and all's right with the world. Contrary to previously published reports, only three of the original Gershwin songs were retained for the film version of Girl Crazy: I Got Rhythm, performed Ethel Merman-style by Kitty Kelly; But Not for Me, rushed through by nominal romantic leads Eddie Quillan and Arline Judge, then parodied by juvenile impressionist Mitzi Green (who does quickie imitations of George Arliss, Bing Crosby and Edna May Oliver); and Bidin' My Time, used as background music for an opening scene in which the camera slowly pans across the tombstones of Custerville's former sheriffs. Bert Wheeler and his perennial screen vis-a-vis Dorothy Lee deliver the film's best number, You've Got What Gets Me, originally written by the Gershwins for their 1927 production Funny Face. Long unavailable thanks to the 1943 MGM remake, Girl Crazy was resurrected in the late 1970s; though it proved a disappointment for Gershwin purists, it won a whole new fan following for Wheeler & Woolsey, who are very funny throughout.

There are no critic reviews yet for Girl Crazy. Keep checking Rotten Tomatoes for updates!

There are no featured reviews for Girl Crazy at this time.