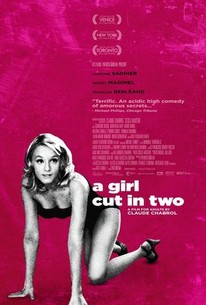 Critics Consensus: Nouvelle Vague master Claude Chabrol balances subtle stabs of humor and biting class criticism to explore a love story and the seedier side of the haute bourgeois.

Critics Consensus: Nouvelle Vague master Claude Chabrol balances subtle stabs of humor and biting class criticism to explore a love story and the seedier side of the haute bourgeois.

Critic Consensus: Nouvelle Vague master Claude Chabrol balances subtle stabs of humor and biting class criticism to explore a love story and the seedier side of the haute bourgeois.

A television weatherwoman is pursued simultaneously by a spoiled pharmaceutical heir and a successful -- but much older -- writer in director Claude Chabrol's blackly comic tale of romance and class differences. Gabrielle Deneige (Ludivine Sagnier) has a high-profile job detailing the forecast on French TV. Yet despite Gabrielle's staunch work ethic, she values her privacy over her professional career and lives in a modest house with her aging mother (Marie Bunel). One day, renowned author Charles Saint-Denis (François Berléand) is interviewed at the television station where Gabrielle works, and the two feel an instant, powerful connection. Later, at a book signing, the pair continues to flirt despite the presence of entitled rich kid Paul Gaudens (Benoît Magimel) -- who openly despises the writer and longs to claim Gabrielle as his own. Despite the fact that Charles is still happily married to his wife of 25 years (Valeria Cavalli), with whom he has set up home in a posh ultra-modern estate in the countryside, he and Gabrielle share an intimate afternoon at the author's nearby pied-à-terre. Later, as the potentially psychotic Paul steps up his pursuit of Gabrielle, the girl begins to question whether either of her suitors is pure in his intentions.

Mathilda May
as Capucine Jamet

Though the performances are all first-rate, the film is let down by weak characterisation. Still, it's enjoyable, if not exceptional.

One's final impression is that aging legends make unreliable puppet-masters. And that it's all too easy for a desirable young actress to be left dangling in mid-air.

This is one of Chabrol's most elegant, acerbic and heartfelt entertainments in years.

The performances drip with cliché, while the narrative is all over the place: plot developments are either clumsily telegraphed or given the flimsiest of dramatic explanation.

With elegance and despatch, veteran new wave master Claude Chabrol has brought off his most enjoyable film for some time.

Chabrol may be one of the great survivors of the New Wave, but this is an old man's film.

The film's surface realism won't fool anyone: it's clear that The Girl Cut in Two is a fable, a dark modern-day fairy tale about innocence and corruption, power and illusion.

Leave it to master Claude Chabrol, though, to make a film about the varieties of corruption and depravity without so much as a glimpse of nudity.

A few flashes of insight or giddy humour, conveyed via portentous close-ups or fast cutting, remind us of Chabrol's directorial power; but he seems rather too casual behind the camera lately.

Claude Chabrol is a trespasser, one who has ventured into an uncharted place where the droll is almost totally sublimated into the sinister, and it is nearly impossible to tell when his films are joking or when they are cutting.

Another patented Chabrol commentary, not a morality play but something far more worldly and difficult to ignore.

Chabrol's astute dissection of sex, class and show business. Bravo, Claude, a rare man in profound touch with the darker impulses of his species.

I'll be honest, I only watched The Girl Cut in Two because I think Ludivine Sagnier is a Class A hottie. So it's probably not a shock that I was underwhelmed by it. It's a rather French movie about a woman (Sagnier) who is pursued by two men, a young and emotionally volatile rich man, and an older married writer. Both men are ultimately bad options, and the movie quickly changes from something of a charming romantic film to something much darker in tone. It could be called "a movie cut in two", if a person wanted to be clever (which I do). Anyway, neither half of the movie was particularly good, in my opinion. The narrative tended to wander, Sagnier's character seemed silly and unsympathetic with little explanation of why, and the other characters were almost universally unlikable or uninteresting. Combine all that with the odd (and not in a compelling way) ending, and The Girl Cut in Two becomes a movie that I probably wouldn't recommend.

A most infuriating film by a famous director. Does Chabrol hate women as much as this indicates? Or is this some sort of Gallic humor that doesn't translate well? A young, somewhat naive woman, Gabrielle (Ludivine Sagnier) is pursued by two equally despicable characters. Charles (Francois Berleand) is a worldly, famous author who wins her heart and then uses and abuses her. Paul (Benoit Magimel) is a member of the idle rich, a spoiled brat intent on getting his way, no matter what. That Gabrielle was forced to choose either of these losers and suffer greatly no matter which way she chose did not fit with her image as a successful TV journalist on the way up. This is France. This is Paris. Either choose to show us the depravity, or give us hearts and flowers. This was totally unacceptable, as Chabrol gave us neither. He also chose to give us no one with whom the audience could identify or view with any sympathy. Beautiful scenery and fine acting. The craft is unmistakable. For that, I give it three stars. This viewer just hated the story and what it says about this particular woman, and by extension, women in general.

A thriller inspired by the infamous, murderous New York love triangle between Evelyn Nesbit, Harry Thaw and Stanford White. The story takes place in modern-day France: Ludivine Saigner plays the lead, a lovely weather girl, Francois Berleand is the famous, aging writer who begins an affair with her, and Benoit Magimel is the psychologically unstable -young-millionaire who wants to marry her. These superbly-written and overall unpleasant characters drift between the evil and the ingenue with slyness. Selfishness and immorality abound, everyone takes advantage of everyone, and approches everyone for reasons very different from love. So all in all, as I watched, I knew all three characters were bound for something tragic. Chabrol is a skilled, competent filmmaker, and his film never falls flat, never bores, it keeps a steady pace and a consistent veil of suspense and uncertainty. To put it simply, it is a regular Hitchcock, with less censorship limitations. While it isn't an extraordinary film it is a good thriller with some black comedy moments. And what's best, it is a non-cop thriller; therefore it has less opportunities to be commonplace, and less pressure put on a typical police figure. All the interaction within La fille coupée... takes place in a very (un)civic and unlawful context in which unbridled sexual and emotional promiscuity thrives, not just between the members of the "love" triangle but between them and their immediate surroundings. Everyone in this film very much wants to be uncompromisingly seduced and is more than willing to dispose after using. So, there's not much left to say... a thriller about bad things that happen to people of questionable morale (there are no bad guys here!)

[size=3]Another French film about erotic obsession. Quelle surprise! "A Girl Cut in Two," by the nearly 80-year-old director [b]Claude Chabrol[/b], is the one-hundred-millionth French film about sexual passion run amok. How is it that the French can still stomach their national cinema when the same theme is repeated over and over ad nauseam? [/size] [img]http://www.thereeler.com/images/girl_cut_500.jpg[/img] [size=3]Once again a delectable young French woman (this time played by the talented [b]Ludivine Sagnier[/b]) is caught in an erotic triangle. One of the men is a highly educated sixtysomething literary author, played reasonably well by [b]Francois Berleand[/b]. (The French seem to have a law requiring that every film have at least one literary writer in it.) [/size] [size=3][/size] [size=3]The other man, happily, is a character not seen every day in French cinema. He is a spoiled, somewhat deranged aristocrat. In the hands of actor [b]Benoit Magimel[/b], he is fun to watch. [/size][size=3]But his absurdly effete haircut (see photo below) is one of the all-time worst hair designs in the history of French cinema. He looks like he gets put together each day by the worst drag queen in Paris. And what's horrendous is that the film takes his haircut seriously. No one in the film laughs at his hair, only the audience in the theater does.[/size] [img]http://z.about.com/d/worldfilm/1/7/g/x/fille2.jpg[/img] [still working on this] [img]http://z.about.com/d/worldfilm/1/7/l/x/fille7.jpg[/img]