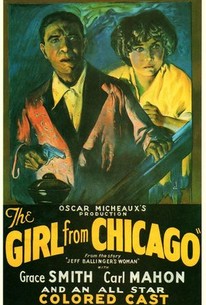 The Girl from Chicago Photos

An African-American Secret Service agent (Carl Mahan) saves a young girl from a fate worse than death in this typical low-budget "all-black" melodrama produced, written, and directed by Oscar Micheaux. Returning from Europe, Secret Service agent Alonso White (Mahan) is assigned to a case in Batesburg, Mississippi. At his lodgings, he meets and falls for the town's new schoolmistress, Norma Shepard (Starr Calloway), later rescuing the girl from being ravished by nasty Jeff Ballinger (John Everett). By coincidence, Ballinger proves to be the very man agent White was assigned to track down. After shipping Ballinger off to jail, Alonso and Norma depart for Harlem, New York, where Norma's former landlady, Mary Austin (Eunice Brooks), now lives. Having lost all her money gambling in the Radium Club, Mary is accused of murdering Gomez, the owner. As Alonso and Norma prove, the real killer was Liza, the estranged mistress of Ballinger and now Gomez's wife. This confusing melodrama was actually a reworking of Micheaux's silent The Spider's Web, both having been based on the director's unpublished Jeff Ballinger's Woman.

Critic Reviews for The Girl from Chicago

Though one of Micheaux's most famous films it is not one of his best.

There are no featured reviews for The Girl from Chicago at this time.

The Girl from Chicago Quotes