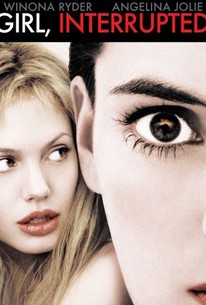 In 1967, after a session with a psychiatrist she'd never seen before, Susanna Kaysen was diagnosed with Borderline Personality Disorder-an affliction with symptoms so ambiguous almost any adolescent girl might qualify-and sent to a renowned New England psychiatric hospital where she spent the next two years in a ward for teenage girls. There, Susanna loses herself in an OZ-like nether world of seductive and disturbed young women: among them Lisa, a charming sociopath who stages a disastrous escape with Susanna, Daisy, a pampered girl with a predilection for rotisserie chicken, and Polly, a remarkably kind burn victim. Ultimately, assisted by the hospital's head psychiatrist, Dr. Wick, and a no-nonsense ward nurse, Valerie, Susanna, like Dorothy, resolves to leave this Oz and reclaim her life.

It's an interesting story, based on actual events.

Does it matter that every time Jolie's offscreen the film wilts a little? Ryder should be perfect as the bright spark; her lines are sharp as a knife. There's a gap, however, between what we hear and what we see.

A muddled production that misses the jarring tone of the autobiographical book by Susanna Kaysen on which it is based. The film is entertaining, but not very powerful.

You're left wishing the film had a little more faith in its audience, for then this well-put-together movie might have provoked more thought, and slightly less irritation.

The inclusion of this picture on [Mangold's] resume will only enhance his future prospects.

Girl, Interrupted is well-performed but hollow - and ultimately unsatisfying.

The film is entirely disposable. Watching a group of teenagers "tongue their meds" (which does not mean doing something rude with a junior doctor) and sobbing out of windows is boring.

Meaty roles for an eager young female ensemble. On that level, and on several others, the movie triumphs.

We end up getting thin supporters as seen through the eyes of a main character that doesn't do anything.

Sounding like the scribblings from a teenager's diary, the 28-year-old Ryder lapses into self-parody.

There's little new in this Hollywood look at mental illness, female style, except that for once the staff is actually given a little respect, like they might know a little about what they're doing. The obvious segues into overblown hysteria are avoided for the most part and the whole affair is not too distasteful.

Based on the autobiographical novel by Susanna Kayson chronicling her time spent in a mental institution following a suicide attempt, Girl, Interrupted is not quite what you'd expect; namely "One Flew Over The Cuckoo's Nest For Chicks". It's true that the story is dominated by Jolie's Oscar winning turn as the rebelliously anti-social yet charismatic Lisa, but the story is a lot more sympathetic towards the staff of the hospital and what they were trying to do. The cast of likeable weirdos make for an engaging bunch of misfits which makes up for the fact that it lacks any real kind of power or emotional resonance and it's nicely non-judgemental when it comes to the depiction of both the inmates and the staff who are genuinely trying to help them. Hardly the most challenging portrait of mental illness but enjoyable none the less.

Sometimes the only way to stay sane is to go a little crazy Good Film! It was a very well made film with some terrific acting. Angelina Jolie in probably her best role as an actress won her an Oscar for Best Supporting Actress in that year. Good plot although a little too slow for my taste but decent enough. Susanna is depressed and directionless after finishing high school in the late 1960's. A suicide attempt lands her in Claymore, a mental institution. She befriends the band of troubled women in her ward (Georgina the pathological liar, the sexually abused Daisy, the burn victim Polly) but falls under the hypnotic sway of Lisa, the wildest and most hardened of the bunch. Will Susanna "drop anchor" at Claymore and perpetually act out like Lisa, or will she finally pull her mind together and leave institutional life behind?