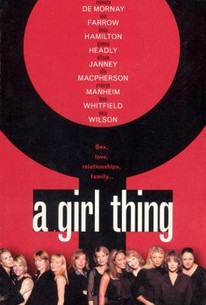 Stockard Channing stars in this made-for-cable comedy-drama as Dr. Beth Noonan, a female psychiatrist trying to hold her life together as she guides four of her patients through personal turmoil. Lauren Travis (Elle MacPherson), a respected lawyer, finds her sexual identity thrown into question when she discovers she's attracted to another woman, Casey (Kate Capshaw). Helen McCormick (Glenne Headly) is forced to spend a week with her two estranged sisters, Kathy (Allison Janney) and Kim (Rebecca DeMornay) after the death of their mother. Nia Morgan (Lynn Whitfield) is convinced her husband is being unfaithful to her; she hires Rachel (Linda Hamilton) to lure her spouse into infidelity, but Rachel learns that Nia's husband is actually involved with Betty (Mia Farrow), an older and unglamorous waitress. And after Dr. Noonan decides she can't handle the deep neuroses of Suzanne Nabor (Camryn Manheim), Suzanne snaps and takes the doctor hostage, along with three other people. It's a Girl Thing also stars Scott Bakula, Buck Henry, and Bruce Greenwood; it first aired in two parts on the Showtime premium cable network in January, 2001.

Margo Martindale
as May

Kevin McNulty
as Peter
View All

Critic Reviews for A Girl Thing

Audience Reviews for A Girl Thing

There are no featured audience reviews yet. Click the link below to see what others say about A Girl Thing!