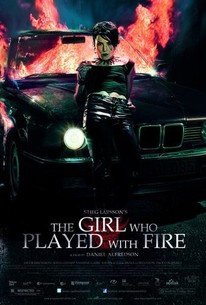 Critics Consensus: Noomi Rapace and Michael Nyqvist remain extraordinarily well-suited to their roles, but the second installment in Stieg Larsson's Millennium Trilogy doesn't pack quite as much punch as the first.

Critics Consensus: Noomi Rapace and Michael Nyqvist remain extraordinarily well-suited to their roles, but the second installment in Stieg Larsson's Millennium Trilogy doesn't pack quite as much punch as the first.

Critic Consensus: Noomi Rapace and Michael Nyqvist remain extraordinarily well-suited to their roles, but the second installment in Stieg Larsson's Millennium Trilogy doesn't pack quite as much punch as the first.

In "The Girl Who Played With Fire" -- the second installment in the "Millennium" trilogy following "The Girl With the Dragon Tattoo" -- Mikael Blomkvist is about to run a story that will expose an extensive sex trafficking operation between Eastern Europe and Sweden, implicating well-known and highly placed members of Swedish society. On the eve of publication, the two investigating reporters are murdered and the fingerprints found on the murder weapon belong to Lisbeth Salander

Per Oscarsson
as Holger Palmgren

Paolo Roberto
as Himself
View All

This is an enjoyable thriller: there's no shortage of action, intrigue and girl power.

The second film is more efficient than the first, less concerned with getting all the story on to the screen.

Director Daniel Alfredson taking over from Niels Arden Oplev, maintains the sometimes disconcerting mixture of violence and righteous investigation that characterise the series.

It's still a terrific story, but as told here it's much more superficial and much less enthralling. I'm now more than ever looking forward to David Fincher's take on the material.

Stuffed full of cliches and caricatures, the reigning one here being a large, blonde, over-muscled blockhead who feels no pain. If only audiences had the same advantage.

Readers of the books will surely be still delighted with Rapace's intense performance and those not familiar with them should enjoy an above-average thriller.

A finely made, suspenseful thriller, a must see.

Although probably less purely exciting than its predecessor, The Girl Who Played with Fire is in some respects the more sober, realistic story.

A great story to be immersed in.

As a movie, it seems shapeless.

Part of Dragon Tattoo's draw came from its sanguine sensationalism while Played with Fire is more dour, and as such it's less fun.

... an improvement on the first film, moving away from the murder mystery conventions of the first film to focus on the terrible past of Salander that returns with a vengeance.

An underwhelming, overly convoluted and completely forgettable mess of a sequel full of inconsistencies and nonsensical situations, and it depends on too many coincidences and plot holes to keep its implausible narrative moving on.

Lisbeth Salander is the prime suspect in a scandal involving Swedish sex trafficking. I love Noomi Rapace as Lisbeth Salander, and even if she were just reading the phone book, I think I'd find her performance and the character compelling. While The Girl who Played with Fire isn't the phone book, it's not as interesting as The Girl with the Dragon Tattoo because there isn't the cold case antiquity of the mystery and the depth of having family drama at the film's heart. Focusing on sex trafficking, what this film does have is a clearer concentration on the theme that prevailed in Larsson's first book, misogyny. It's a theme Larsson handles with ease, creating male monsters and reasons why women like Salander revolt. Overall, the Millennium Trilogy continues to compel even if this doesn't reach the great heights that the original achieved.

Discounting the weak and slow beginning, this second part in the Millenium trilogy is just as enthralling as the original. I long pushed off to watch it, after hearing about all the low to luke-warm opinions, but it actually proved to be a very worthy sequel. In the first 30 min you'll be tempted to hit the fast-forward button, but those patient enough to endure it, will be greatly rewarded in the second and final act. For what started out rather dullishly, eventually blossomed into a taut and compelling follow-up, with some incredibly fascinating plot twists. Not fully to the level of being on par with "Dragon Tattoo", but I'm still willing to give it the same rating, as the shortcomings are mostly in the margins.

Following up the amazing Girl With The Dragon Tattoo film was a tall order. This was no where near as good as the first movie and seemed to be very haphazard in patching together important parts of the book while leaving the parts out that might make sense. The books excellent the movie is good but not great.