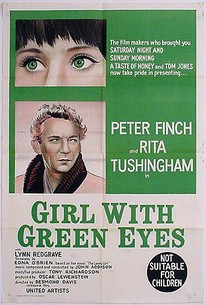 Rita Tushingham was propelled into stardom with The Girl with Green Eyes. She plays a gawky young rural Irish girl who takes a room with a wise-cracking Dublin lass (Lynn Redgrave). Enter a middle-aged writer (Peter Finch), who makes a beeline for the shy, lonely Tushingham--completely ignoring her more worldly roommate. Girl with Green Eyes was liberally based upon Edna O'Brien's novella The Lonely Girl. With this one film, Rita Tushingham not only became bankable, but also what is known as a "critic's darling", meaning that she could do no wrong in the eyes of certain male reviewers. The bloom was off the rose fairly quickly, and soon Ms. Tushingham found herself contractually committed to one second-string project after another, including an ill-advised reteaming with actress Lynn Redgrave and director Desmond Davis in the resistible Smashing Time (67).

May Craig
as Aunt

The camera is used as a painter's brush and a surgeon's scalpel as it delineates each feature in countless expressions.

I like the story so much that I wondered for a long time why I so disliked the picture, why it seemed so spurious.

Rita Tushingham is sheer delight as the girl.

It's a refreshing treat.

It has humor, always a link to outside reality, and its theme is broad enough to interest both sexes.

The film that made Rita Tushingham a star.

"Girl with Green Eyes" doesn't quite qualify as one of Britain's "kitchen sink" films -- it's closer to a traditional romance. Yes, it's in black and white, but it would have been more affecting in color. Certainly, the title would have been better served. The story opens with buddies Kate (Rita Tushingham) and Baba (Lynn Redgrave) giggling around the city, but this is just exposition. What matters are their chance encounters with Eugene (Peter Finch), a well-off, handsome writer who's freshly separated from his wife. Kate is immediately infatuated with him, and an unlikely love grows between them. Emphasize "unlikely," because he is twice her age and the two actors have little chemistry. Baba has no problem with Eugene, but everyone else does. Kate's boorish Irish-Catholic family is furious, and Eugene's sophisticated friends look down upon Kate in return. Meanwhile, Eugene's estranged wife and daughter never appear on camera but remain prominent in his thoughts. Can the relationship survive these obstacles? Perhaps we should ask the melancholy oboist who dominates the score. The story eventually verges on soap opera, but this is a nice little movie. But director Desmond Davis must have realized Redgrave was a more interesting partner for Tushingham than Finch, because he reunited the gals in "Smashing Time" three years later.