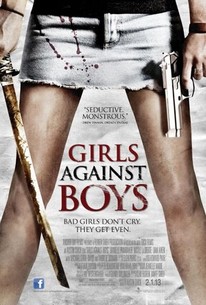 When Shae (Danielle Panabaker), a naïve college student, is tormented by several men in a matter of days, she reaches her breaking point, and is drawn into coworker Lu's (Nicole LaLiberte) twisted plan for revenge. Together, the two embark on a gruesome killing spree, terrorizing and brutally murdering not just their attackers, but any man who gets in their way. However, after a wild weekend of retaliation, the friendship between the girls shifts into a dangerous obsession, and their perverse game becomes a desperate struggle for Shae to maintain control against Lu's deadly and seductive influence. (c) Anchor Bay

Critic Reviews for Girls Against Boys

It's likely this will end up being something of a minor cult sensation growing in esteem as more adventuresome eyes are slowly drawn its way.

The B-horror standbys that might rescue the film from self-serious tedium are nowhere to be found.

When it comes to "Girls Against Boys," it's a draw - everyone loses.

In "Girls Against Boys" both sides lose.

A dumb, dreary, let's-get-back-at-them slasher in which pulverized genitals pass for feminist critique.

Chick takes the material way too seriously, turning what could have been a fun murderous romp into something truly disturbing, disgusting and often quite miserable.

I'm not sure Girls Against Boys will end up as one of my very favorite film, but it is a movie I'd like to see again and it impressed me on almost every level. If you can handge the pitch black tone of this one, I'd recommend [it]...

Girls Against Boys is a pro-female exploitation flick that completely misses the mark on being pro-female, exploitation, and most importantly, a good movie.

...a seriously off-the-wall little movie that offers more entertainment value than most efforts of this ilk...

Austin Chick's GIRLS AGAINST BOYS is clothed in the sort of misguided feminism that shoves a gun in the hands of leggy bartenders and calls them empowered.

A wan, overly precious and self-satisfied psychological thriller that tries to toe the line between gender statement and ambiguity, and fails.

Audience Reviews for Girls Against Boys

In "Girls against Boys," college student Shae(Danielle Panabaker) is dumped by her older boyfriend Terry(Andrew Howard) when he returns to his wife. It is little consolation when he tells her that there are plenty of guys her age out there and plenty of anger when she finds out he also has a daughter. In order to cheer her up, her co-worker of two weeks, Lu(Nicole LaLiberte), takes her clubbing and drinking. But when Simon(Michael Stahl-David) takes Shae back to her place, he ends up brutally raping her. "Girls against Boys" may have decent cinematography and a talented lead actress in Danielle Panabaker. But there is no disguising this run of the mill exploitation movie, and one that takes forever to get started, too. That's not to mention the lack of three dimensional characterization, especially regarding a lead character who comes off as feckless more than anything else, even with her travails. And as little a fan as I am of the police, it is hard to buy them as insensitive and incompetent as they are depicted here, especially once the bodies stop dropping.