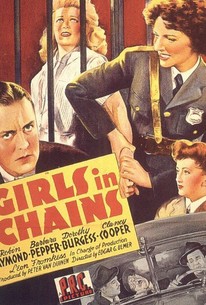 In this unique murder mystery, that reveals the killer at the beginning of the film. The story concerns some women living in a prison reformatory and centers around a vengeful teacher who works there. With the help of a detective, an inmate endeavors to get her corrupt brother-in-law arrested and put in jail. Her sister is a teacher who recently lost her job because of her marriage to the crook. The sister ends up taking a teaching job at the reformatory. It is there that she finally finds enough evidence (her spouse is also involved with some shady deals with the school superintendent) to put him away for good.

Henry B. Walthall
View All

Critic Reviews for Girls in Chains

The real stars of the film are those beehive hairdos sported by the gals.

Audience Reviews for Girls in Chains

This feature has a title that should have sold the work outright, if not the premise ... but no. So very bad, boring as vegetarian cuisine, and ultimately unwatchable.