Girls Just Want to Have Fun1985 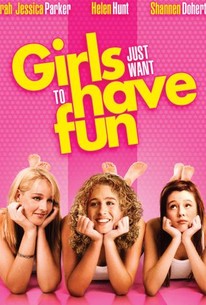 Ostensibly based on the hit single by Cyndi Lauper, Girls Just Want to Have Fun is actually a spoof of the MTV generation. High school chums Janey (Sarah Jessica Parker) and Lynne (Helen Hunt) desperately try to enter a dance contest on a major cable-TV channel. The major obstacle to this goal is Janey's father, stiff-necked Colonel Glenn (Ed Lauter). The girls' most hated rival is rich-witch Natalie Sands (Holly Gagnier), who buys her way into the dance show. The plot, what there is of it, falls apart long before the final scene, but Girls Just Want to Have Fun gets by thanks to the winning performances of stars Parker and Hunt.

Candace Daly
as Girl in Hallway

Candice Daly
as Girl in Hallway

Cecilie A. Stuart
as Featured Dancer

Scott Coffey
as Dancer
View All

Critic Reviews for Girls Just Want to Have Fun

Dance to the cheesy '80s beat with tweens and up.

We all know a movie like this isn't appealing to anyone beside the folks who grew up during that time. And even they will be compelled to cringe at its mention...

It's a total wannabe in the realm of 80s teen flicks.

Nostalgia forces me to like this. Yes I feel guilty!

Metter's "Girls" may just want to have fun but for the rest of us this concept is just wishful thinking.

If you're going to base a movie on a song, why not choose a song that's, y'know, about something?

Audience Reviews for Girls Just Want to Have Fun

A stupid teen flick that may be mildly amusing at times but is mostly really silly and forgettable, with awful dialogue and clichés everywhere, being only worth it for its nice '80s songs and not much else.

Getting into trouble is easy but getting out of it is all the fun! Good 80's movie! I very much enjoyed and like this movie, the dancing, the song's were all great. It's a good old 80's movie and there's nothing better than the 80's! Janey is new in town, and soon meets Lynne, who shares her passion for dancing in general, and "Dance TV" in particular. When a competition is announced to find a new Dance TV regular couple, Janey and Lynne are determined to audition. The only problem is that Janey's father doesn't approve of that kind of thing.

This teen dance comedy is a lot of fun, girls will especially like this movie for the romance and Parker's character. I really liked this movie.