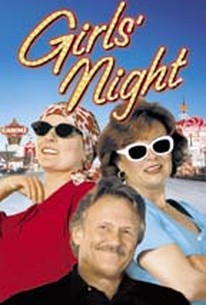 In the British North Country, in-laws Jackie (Julie Walters) and Dawn (Brenda Blethyn) work together on an assembly line at an electronics firm. Dawn is married to Jackie's brother Steve (George Costigan). Jackie's marriage is collapsing, and she has a secret affair with a bingo club run by Paul (James Gaddas). TGIF, the girls' night out, and while Jackie and Paul are engaged in a back-office tryst, Dawn wins the pot of $100,000. She shares the loot with Jackie, who uses it as an opportunity to ditch both the husband and the job. Dawn has a seizure, diagnosed as a brain tumor, but she keeps it secret. When Jackie buys two tickets to Vegas, Dawn joins her at the airport, not bothering to let her husband or children know about the trip. In Vegas, the two dress as rhinestone cowgals, ogle an Elvis impersonator, and meet Cody (Kris Kristofferson), heading home just before things turn grim. Shown at the 1998 Sundance Film Festival. ~ Bhob Stewart, Rovi

Both actresses are far more vibrant than Kay Mellor's screenplay.

There are no featured audience reviews yet. Click the link below to see what others say about Girls' Night!