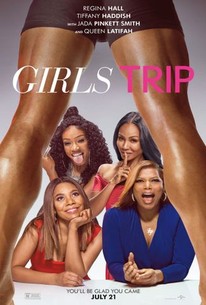 Critics Consensus: Girls Trip is the rare R-rated comedy that pushes boundaries to truly comedic effect -- and anchors its laughs in compelling characters brought to life by a brilliantly assembled cast.

Critics Consensus: Girls Trip is the rare R-rated comedy that pushes boundaries to truly comedic effect -- and anchors its laughs in compelling characters brought to life by a brilliantly assembled cast.

Critic Consensus: Girls Trip is the rare R-rated comedy that pushes boundaries to truly comedic effect -- and anchors its laughs in compelling characters brought to life by a brilliantly assembled cast.

Sunny Hostin
as Herself

Ralph E. Tresvant
as Himself

Johnny Gill
as Himself

Ricky Bell
as Himself

Michael Bivins
as Himself

Ronnie DeVoe
as Himself

Iyanla Vanzant
as Herself

Sean Combs
as Himself

Faith Evans
as Herself

Terry McMillan
as Herself

Morris Chestnut
as Himself

Gabrielle Dennis
as Herself

Jaina Lee Ortiz
as Herself

Lorraine Toussaint
as Herself

Ava DuVernay
as Herself

Melissa Harris Perry
as Herself

Carla Hall
as Herself

William Levy
as Himself

Kevin Frazier
as Himself

Mariah Carey
as Herself

Doug E. Fresh
as Himself

MC Lyte
as Herself

Lalah Hathaway
as Herself
View All

I want at least three more sequels and a series after this.

It's a raucous ride, unlike anything I've ever seen in theaters.

...the bond between the four women - and occasional lack thereof - demands repeat viewing much more than the sporadic shocks of gross-out (and grapefruit) humor.

[Tiffany] Haddish is a genius technician of physical comedy, at once subtle and gigantic.

Girls Trip is the breakout comedy of 2017. Do not let the summer end without going to see this movie.

Expect start-to-finish hilarity, of both a sexual and scatological nature.

These grosser gags may put some off, but most will cry with laughter. When these four share the screen, sparks fly and the chemistry is perfect.

Girls Trip is clearly not the product of comic actors haphazardly riffing on set until they reach their joke quota. Here, instead, is a movie that feels like having fun with real people.

If you need a good deep belly laugh, this is your movie.

A perfect example of a film where the cast truly matters.

I didn't like Girls Trip. No great shock there, it's an American Comedy in much the same vein as a great number of American Comedies that have come before it I didn't like. A lot of other people did like it. That's fine. Different strokes for different folks. All that jazz. I totally understand it. What I don't understand is the vast number of people who have said "This one's different. This movie is gonna appeal to the people who don't normally go in for this sort of thing. It breaks all the conventions and even Independent film & Oscar film fans will love it". Like... No... When you follow up your piss-joke with the exact same piss-joke just seconds later... It's like... This is exactly the same as every other movie I hate.

An exceptionally funny and worthwhile comedy!

It's very rare that a comedy comes out and many of the jokes stick with you afterward. Not since films like Superbad, Anchorman, or The 40-Year-Old Virgin has a film come out and become a worldwide classic in terms of its jokes. Many years have passed by since the last quotable comedy, and while I can't say that Girls Trip is destined to become the next one of those, it has definitely made a statement for comedies in 2017, because this particular genre has been pretty dry. As I said, this film won't be remembered as a classic, but it's a really solid flick that doesn't shy away from raunchy jokes, and it brings just enough heart to the table to make you care about where each of the characters end up. Here is why I believe Girls Trip is worth your time. Ensemble pieces are usually what makes or breaks a comedy for many people. When actors or actresses can play off each other, that's where many of the laughs come from. Sure, Chris Farley stumbling around is funny, but a full film based on that can become tiring, which is where chemistry between actors and actresses comes in handy. Although movies like Bridesmaids are hard to top in terms of an ensemble of women leading a feature film, I would go as far as to say that Girls Trip gives it a run for its money. Following a group of women after they've been separated from their childhood antics due to either becoming famous or needing to focus on their work, an opportunity brings them back together and grants them one last chance to become true friends again. Having to deal with troubled relationships, wanting to have sex, and just wanting to cut loose for a weekend, Girls Trip is the type of comedy that can really catch you off guard if you're not expecting a wild and raunchy ride. I personally love Regina Hall in pretty much everything she's in and Queen Latifah and Jada Pinkett Smith deliver solid performance and are believable as best friends. The standout of this film is easily the wild one of the bunch, played by Tiffany Haddish. Now, if you're easily offended by raunchy people, then her performance alone will probably turn you off, but if you're all in, then she makes this movie truly worthwhile. Her eccentric character equally disgusted me and put a smile on my face. So as far as the chemistry between the characters and the comedy itself goes, this movie is a blast from start to finish, but that's not really enough to call it great. Yes, I thoroughly enjoyed my experience with this film, but the story itself is something you've seen a million times before. Friends reconnect, some of them need to mend a few wounds and each of them has their own personal issues to deal with. You can see the ending from a mile away, but at least the cast holds it together extremely well, delivering believable performances, making you not complain too much about the premise itself. In the end, Girls Trip is easily recommendable for those who enjoy R-rated comedies, but if you're looking for something tame, I would advise against it. Simply put, this movie is all too familiar to call it one of the best comedies I've seen in a while, and while I find myself remembering many of the jokes and would watch it a few more times for the chemistry and antics, the movie itself just isn't sticking with me the same way the jokes are. I would call this a mixture of The Hangover and The Hangover: Part II, in that you like the characters, but the premise itself feels familiar. It has some great jokes as if you were watching The Hangover for the first time, but there are moments that leave a bad taste in your mouth like The Hangover: Part II did. Still, I enjoyed it from start to finish, so it gets a recommendation from me.

I don't understand the high rating. Though the end message was nice and empowering, the middle was an absolute mess. Crude for the sake of it, not funny, don't even start me on the pissing scene. I actually really hate how any girls night comedy has to involve drug scenes and heavy drinking and people behaving like animals. It's just really lazy story telling and it's not funny either. I'm not a prude and swearing doesn't bother me, but less is more. The heavy drama scenes with swearing would have carried more weight if the character didn't speak like that constantly. Honestly I found a lot of this nasty. Boring too. Which is a shame because handled differently, this movie could have been good.